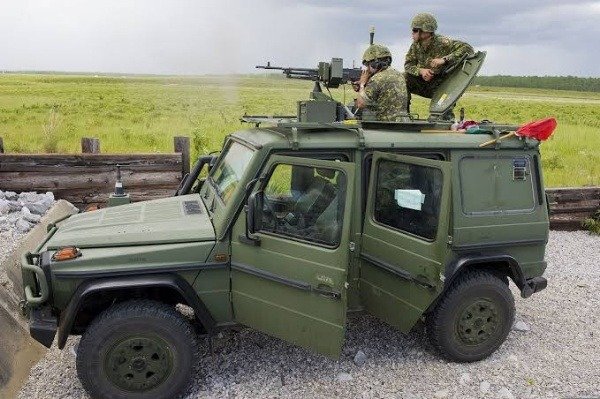 Through the years, countries, including Egypt, Austria and Germany, have used the millitary version of the Mercedes G-Class SUV as a military vehicle, ambulance vehicle, or as armed vehicle. 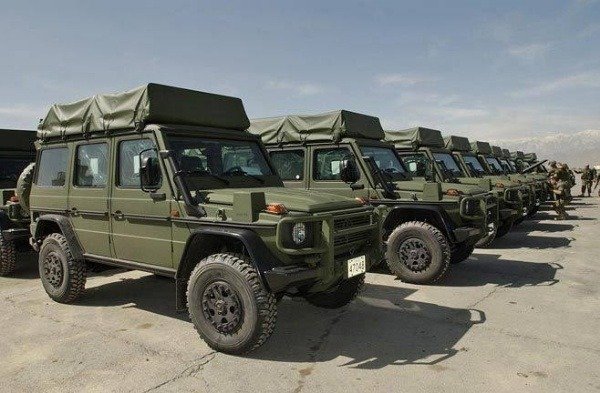 The Mercedes G-Class, sometimes called G-Wagen (short for Geländewagen) is manufactured by Magna Steyr in Austria and sold by Mercedes-Benz. The SUV, which has been sold under the Puch name as Puch G, is a favourite amongst celebrities.

The boxy Mercedes-Benz G-Class has always been much more than just an extravagant off-roader for the masses.

Through the years, the millitary version, produced in the same factory with the luxury models, has been used as a military vehicle, ambulance vehicle, or as armed vehicle all around the world.

The SUVs and its range of trailers and modules are used in tactical training, disaster relief and securing coastline. 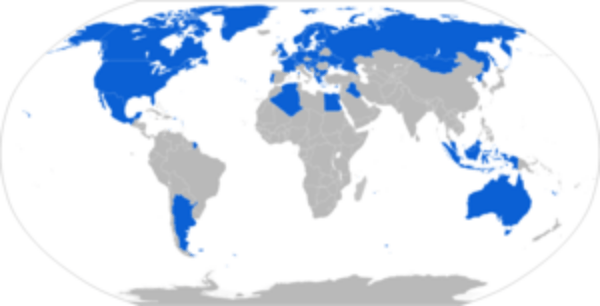 Below is the list of countries that whose millitary boast of Mercedes G-Class SUVs in their fleets.

Albania
Since the 2010s, the Albanian Army has been using G-Class vehicles. 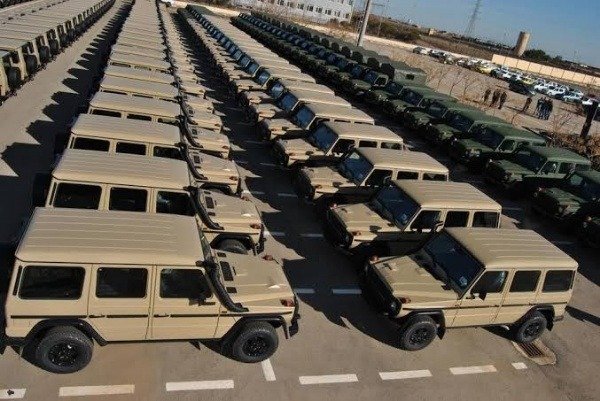 Since the 2010s, the Algerian Army, Gendarmerie Nationale and the Algerian police have been using several models of G-Class 6×6 G 500. Most of those vehicles are manufactured by Algerian army owned Bouchekif factory, Tiaret.

Argentina
Since the 1980s, the Argentine Army has used the MB-230G (short and long chassis) for different purposes. 900 remain in service.

Australia
In 2008, Australia purchased 2,268 vehicles with ten variants including 6×6. Australia is the first military customer to receive 6×6 vehicles, the first six-wheel military vehicles built by Mercedes-Benz since 1941.

Belgium
The Belgian Police has been a long time user of first G 500 models. 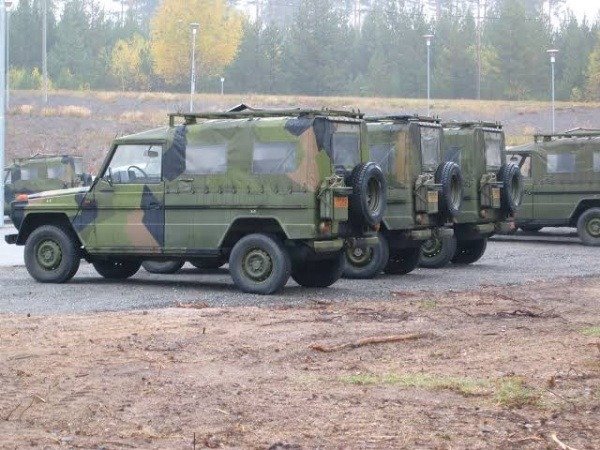 Canada
A total of 1,159 vehicles have been ordered by the Canadian Army since 2003.

Croatia
Croatian army uses 300 to 320 4×4 vehicles in peacekeeping operations. The G-Class is a very popular choice within the Croatian Army.

East Timor
The G-Class is used by units of Army of the Timor Leste Defence Force.

Egypt
The Egyptian Army uses the G 320 (4 × 4) as an armoured personnel carrier. The locally made truck is based on the long-wheelbase version of the German Mercedes-Benz G 320 4 × 4 light vehicle. 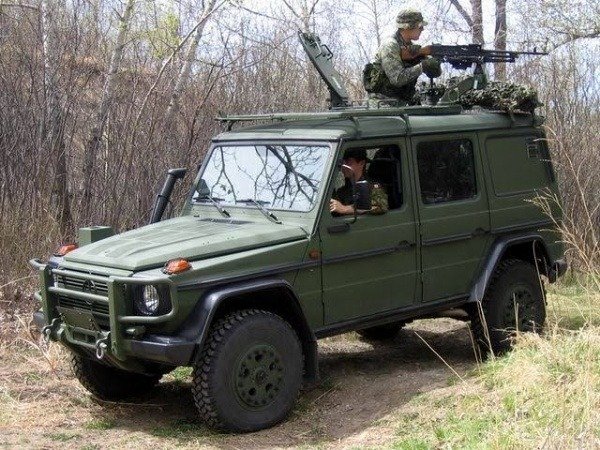 Estonia
The Estonian Defence Forces have a small number of various G-Class vehicles.

Finland
The Finnish Army uses the Geländewagen mostly as armored vehicles and ambulances.

France
The French Army’s Peugeot P4 is a derivative from the G-Class equipped with Peugeot engine and equipment.

Germany
The German Armed Forces uses the G-Class under the name “Wolf”. Over 12,000 vehicles have been delivered in over 50 versions.

Greece
The Greek Army, Air Force, Navy and Police have several versions (462) of the Geländewagen.

Hungary
The Hungarian Ground Forces have 233 of G-270, mounted with UMF light-machine gun platform, and 5 of G-280. 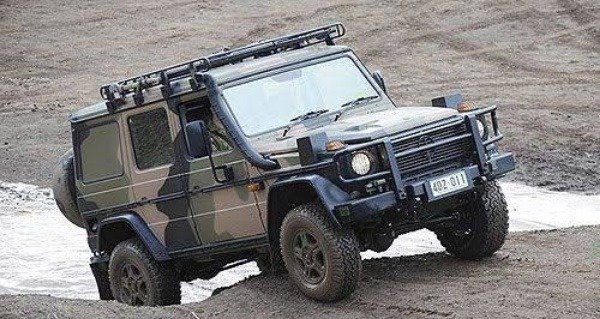 Iraq
The Kurdish Peshmerga has 60 “Wolf” including 20 lightly armored type to help fight off the ISIL forces.

Ireland
The Irish Army used a number of G-Wagens as ambulances.

Kosovo
The KSF use more than 200

Luxembourg
The Military of Luxembourg uses the 300D variant of the Geländewagen.

Malaysia
Locally built by DEFTECH since 2001, the G-Wagon is used along with Land Rover Defender as light transport of Malaysian Army.

Mongolia
The Ministry of Defense of Mongolia operates 10 G-class vehicles (Wolf) donated by the German Government in 2010. 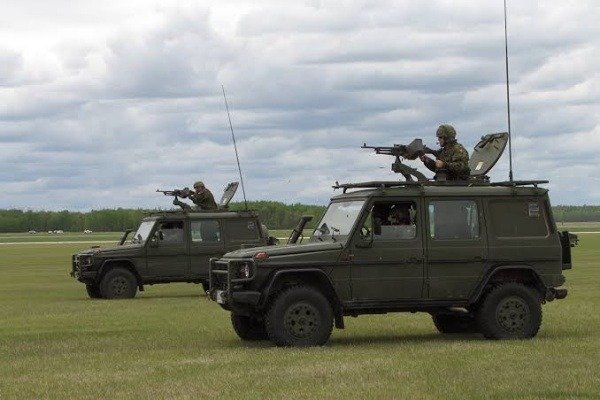 Netherlands
The Royal Netherlands Army uses various versions of the Mercedes-Benz G-Class. The Dutch police and Koninklijke Marechaussee also use the G-Class.

Norway
The Norwegian Army has been using the G-class since mid-1980s. Today the Defence Forces operates a total of 3000 vehicles.

Portugal
The Portuguese Military uses the G-class for light transport along with Toyota Landcruiser, UMM Alter and Land Rover Defender 90.

Russia
Police, state security units, military and governmental agencies are using the G-Class. The G-class is gradually being replaced by the Russian Aurus models.

Singapore
The Singapore Army bought the 270 and 290 versions as secondary military transport. 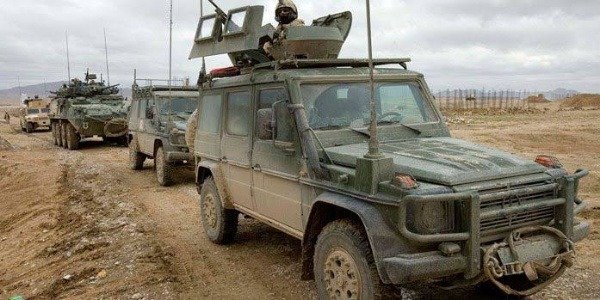 United Kingdom
The British Army used a number of these vehicles in Iraq during Operation Telic, particularly around the Baghdad and Rustamiyah areas.

12 Ways To Make Your Car Last Longer In Nigeria