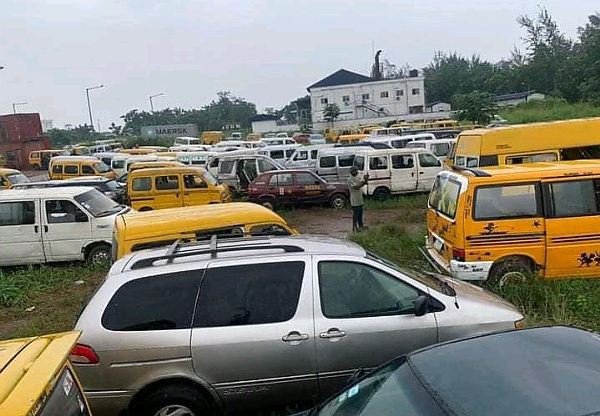 The Lagos State Taskforce says driving against traffic endangers the lives and property of other road users.

Taskforce urge members of the public not to be swayed by the antics of these serial traffic Offenders.

Emphasised that driving one-way is a violation of the State Traffic Laws, which can be curbed by self-restraint when driving.

The Lagos State Taskforce says that driving against traffic (one-way) on major roads will not only disrupt the free flow of traffic but also endangers the lives and property of other road users in the State.

The Chairman of the Agency, CSP Shola Jejeloye made this known during the public auction of impounded vehicles which took place on Thursday at the Taskforce Facility in Alausa, Ikeja.

Jejeloye said most of the auctioned vehicles were confiscated for driving against traffic (one-way) and endangering the lives of Commuters.

“From our records, 80% of hit-and-run victims on Lagos roads were knocked down by motorists who drove against traffic, especially in the early hours of the day”.

Jejeloye further disclosed that some of the traffic offenders who wanted to repossess their vehicles without going through the normal process at the auction ground were notorious one-way Offenders.

He noted that one of them was the man, shown in the viral video, who came with his mother to reclaim his vehicle.

“This man was previously arrested in May 2022 for driving on a one-way road from Oshodi to Mile 2 and even assaulted the officers who tried to arrest him. He was arrested and charged accordingly but only spent three months in Badagry Correctional Facility after conviction”, Jejeloye revealed.

While urging members of the public not to be swayed by the antics of these serial traffic offenders, the Chairman emphasised that driving one-way is a violation of the State Traffic Laws, which he said can be curbed if drivers learn to show self-restraint when driving.