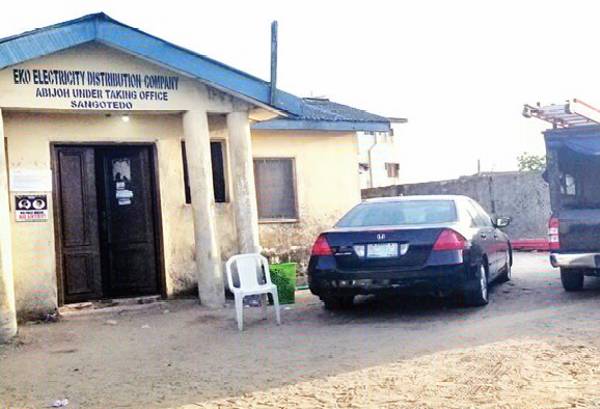 Businesswoman cries out for help after EKEDC impounded her vehicle for 3-months for allegedly breaking a pole.

EKEDC reportedly demanded for N1.2m for repair the pole she allegedly broke.

A businesswoman has accused officials of the Eko Electricity Distribution Company (EKEDC) of impounding her vehicle, a Honda Accord, for over three months for allegedly breaking a pole at their office opposite the Sangotedo Local Council Development Area of Lagos State.

According to PUNCH Metro, the woman, named Ololade Ajayi, had visited a car wash in the area that day to wash her car.

While she was reversing to drive out of the car wash premises, she reportedly ran into an electric pole belonging to the electricity distribution company, causing an electrical spark.

After the incident, Ajayi said officials of EKEDC prevented her from leaving the premises. They later drove her vehicle to their office.

“The incident happened on January 13, 2021. I went to wash my car at a car wash close to the EKEDC office in Sangotedo, but as I was reversing to drive out, I noticed electric sparks and became scared because people were running.

“I suddenly noticed that the wire on the pole had fallen and it crossed the entrance of the car wash, so I could not drive out. The pole also slanted but didn’t fall completely. The next thing I noticed was that three officials of the EKEDC came from their office close to the car wash and said I crushed the pole.

“I told them my car had no scratch and that the pole was not braced properly as it was braced with planks. But the EKEDC officials insisted that they could not allow me to go with my car and we started arguing.

“I left my eight-month-old baby in my shop to pick the car and needed to rush back to her. The officials were insisting that I could not go with the car; one of them collected my key, drove the car to their office and parked it there.”

Ajayi explained that efforts to retrieve her black Honda Accord from the EKEDC office proved abortive. She said that the company had demanded N1.2m for the damaged pole.

“The following day, I went to their office with my husband and one of his friends, but we were referred to another office in Sangotedo, where we met one of EKEDC’s officials who told us that they just wanted to blame me for the pole which had been earlier damaged by another vehicle. The official said EKEDC refused to repair the pole after that vehicle ran into it. They (EKEDC) said I would pay N1.2m for damaging the pole and I said I could not pay for what I did not do.”

According PUNCH Metro, eyewitnesses in the area confirmed to the outlet that the pole fell when a vehicle rammed into it during an accident, adding that Ajayi’s vehicle did not break it.

A mechanic, who gave his name only as Yinka, said :

“They (EKEDC) just want to blame the woman for what another person did. It was a Nissan Pathfinder that damaged the pole initially. They used planks to brace the pole before the incident involving the woman happened.

“The impact of the woman’s car on the pole couldn’t have brought it down if it was braced properly. The woman’s vehicle even had no scratch. The officials are aware of the first accident because the vehicle was abandoned here for days.”

The Chief Legal Officer and Secretary, EKEDC, Wola Joseph, said Ajayi’s car was kept in their office by the police.

“What happened was that when the car hit the pole, the windows were up and the car was locked. They (police) have called her and her husband several times to come and unlock it so that the police could tow it, but they refused.

“EKEDC reported the incident to the police. When the police in Ogombo went to their office, they didn’t see the woman. The police have nothing to do with the parking of the vehicle on the premises of EKEDC.

“The allegation from EKEDC was that the woman hit their pole and it got damaged, so the woman should come to the station so we can hear her own story and start investigation.”

Why Rolls-Royce Cars Are So Expensive