Elon Musk, the Chief Executive Officer of Tesla, must be regretting posting some tweets on the first day of this month.

In a series of tweets, the eccentric entrepreneur said “Tesla stock price too high”,

In a series of other tweets, Mr Musk, 48, also said he was “selling almost all physical possessions” and “will own no house”.

Just those tweets were just enough to wipe $14bn (£11bn) off Tesla’s value, as investors promptly bailed out of the company. It also knocked $3bn off Mr Musk’s own stake in the company.

Nevertheless, Tesla remains almost 50% up from the start of April.

Tesla’s share price has surged this year, putting the electric carmaker’s value at close to $100bn, a mark that would trigger a bonus payment of hundreds of millions of dollars to the entrepreneur. 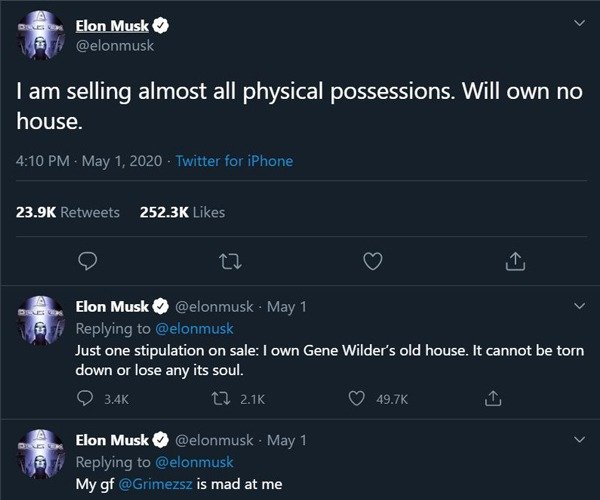 In other tweets, Musk said his girlfriend was mad at him. While another simply read: “Rage, rage against the dying of the light of consciousness.”

It is not the first time Mr Musk has sent provocative tweets.

In 2018, a tweet about Tesla’s future on the New York stock market led to regulators fining the company $20m. Mr Musk also agreed to have all further posts on the platform pre-screened by lawyers.

In April 2019, he posted: “My Twitter is pretty much complete nonsense at this point.”

In August 2018, he tweeted that he had secured funding to possibly take Tesla private.

This particular one led to a fraud case by the US Securities and Exchange Commission, which Mr Musk settled by agreeing to pay $20m (£16m) and have a Tesla lawyer pre-screen tweets with important information about the company.

The latest posts on social media are not the only controversy Mr Musk has found himself in this week.

He recently described the coronavirus lockdowns as “forcibly imprisoning people in their homes” and “fascist”.

“This is not democratic, this is not freedom. Give people back their goddamn freedom!”

Mr Musk said he did not know when Tesla could resume production in California. He called the state’s stay-at-home order a “serious risk” to the business.