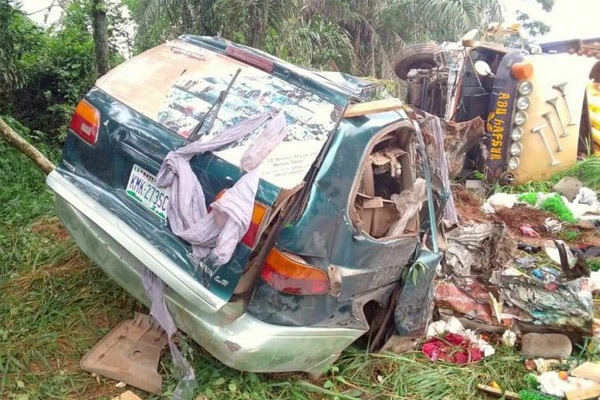 The Federal Road Safety Corps has said no fewer than five persons lost their lives in a fatal accident on the Nsukka-Obollo road in Enugu State.

FRSC Sector Commander in the state, Ogbonnaya Kalu, made this known in a statement on Sunday in Enugu.

Kalu said the accident occurred at about 4 pm at Kpokpo junction, by Micho Link Filling Station, on the ever-busy road.

He said FRSC officials took two seriously injured victims of the accident to the hospital while the remains of the dead were deposited at the morgue.

The FRSC boss said, “At about 4:20 pm., the command got a distress call from a passerby. It was the passerby who informed the Unit Commander at Nsukka of a fatal crash. It happened at Kpokpo junction, by Micho Link Filling Station, on the Nsukka-Obollo road.

“Two patrol teams were promptly drafted to the scene.

“On getting to the crash scene, it was observed that the road crash was as a result of wrongful overtaking by a green Toyota Sienna, with registration number KMK 273 SC.

“The wrong overtaking led to a head-on collision with a multiple-coloured truck (vehicle registration number not found), loaded with fertilisers.

“In the process of the accident, all the five occupants of the Toyota Sienna vehicle died. The driver of the truck and his conductor were taken to the hospital.

The dead victims were taken to the mortuary at Daughters of Divine Love Hospital, Eha-Alumna.  The FRSC personnel from the Nsukka Unit Command took them there.