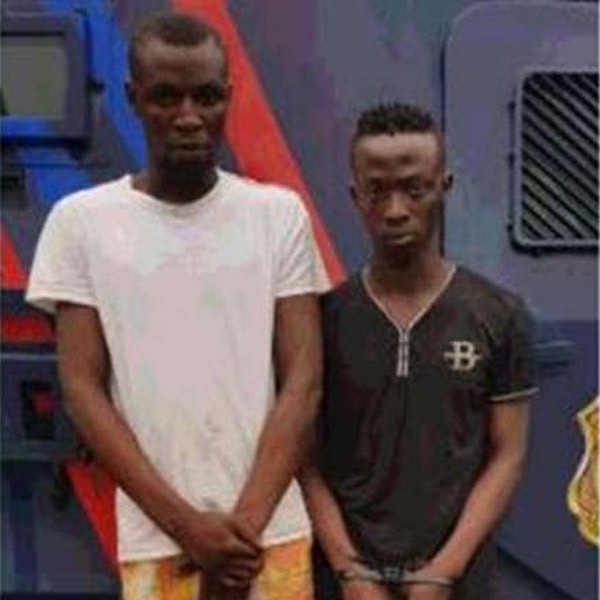 Two suspected members of a robbery gang arrested revealed how they strangulate their victims trapped in traffic in some parts of the Lagos state.

Operatives of the Rapid Response Squad, RRS, of the Lagos State Police Command, arrested the duo of Tunde Olaiya, 24, and Tokunbo Omotola, 26.

During interrogation, they were discovered to be ex-convicts.

They revealed also that members of the gang were scattered in different areas in the state that are prone to traffic.

They mentioned places like Oshodi-Oke, Ojodu Berger, Ikeja, 7up, Kara bridge, Mile 12, and Ojota bridge as their operation areas. Olaiya revealed that “Bolaji Nigga and I are in charge of Ojodu-Berger axis.

“We strangulate victims during operation, we do not collect cars, only phones, and cash. We operate at night, between 8 pm and 10 pm, when there is traffic. The last victim we strangulated was a man who was alone in his car. We collected his iPhone X and disappeared before he could recover”. traffic robbers

On his part, Omotola, said: “I was arrested at Oshodi Oke. At night I attack motorists trapped in traffic and during the day I pickpocket. My robbery points are 7Up, Ojodu Berger; Kara Bridge, Oshodi, Mile 12 and Ojota Bridge.

“When we collect the phones, we would remove the sims and sell them to the receivers at N2000 each. We sell phones separately. I have been in this business since 2017”.

The also disclosed that the stolen phones were reportedly being taken to other members of the gang, who hack victims’ accounts through the sim cards when they were intercepted by the operatives.

The Lagos State Police Public Relations Officer, SP Elkana Bala, who confirmed the arrest, stated that the victim whose phone was retrieved from one of the suspects described his experience in the hands of the suspects as traumatic, adding that the suspects would be charged to court soon.

COVID-19 Transport Guidelines: 1, 460 Drivers Were Arrested By FRSC In Lagos