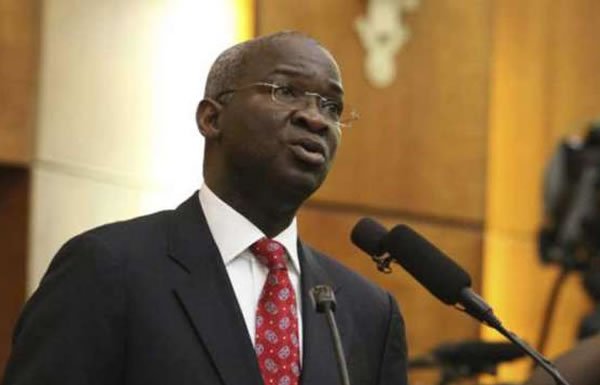 The Federal Government on Monday said it would reintroduce tolling on the nation’s highways to raise the much needed funds to maintain the roads .

The Minister of Power, Works and Housing , Mr. Babatunde Fashola, stated this while addressing members of the Manufacturers Association of Nigeria, who visited him in his office in Abuja .

The minister’s position may be an endorsement of the Senate ’ s proposal in July for the return of tolls on federal roads and the setting aside of 0.5 percent of transport fares paid by passengers on inter – state trips to generate funds for the rehabilitation and maintenance of roads in the country .

Fashola said that the tolling system would only be introduced to road projects that had been completed by the government .

The minister, according to a statement by the Director of Information in the ministry , Mohammed Ahmed, also said the government would spend N 100 bn to be raised from the issuance of the sukuk bond for the reconstruction and rehabilitation of 25 arterial roads .

The sukuk bond, which has been described as a safe and low- risk investment , is being issued by Debt Management Office with a seven – year tenor .

He explained that the sum of N 16. 7 bn would be allocated for each geo – political zone across the country.

Fashola gave some of the prioritised road projects as the dualisation of Ibadan – Ilorin road , Suleja – Minna road , Kano -Maiduguri road and Lokoja -Benin road , as well as the rehabilitation of the Enugu – Port- Harcourt Expressway and the construction of the Kaduna Eastern Bypass.

The statement read in part, “ The Federal Government is reconstructing and rehabilitating 25 arterial roads with an aggressive plan to spend about N 16 . 7 bn for each geopolitical zone across the country.

“ The Minister of Power, Works and Housing , Babatunde Fashola, also stated that the ministry was in the process of re – introducing the tolling system on completed federal highways in order to sustain the maintenance of these roads . ”

The President , MAN , Dr . Frank Jacobs , commended the minister for the ongoing rehabilitation of the Lagos -Ibadan and Onitsha- Enugu expressways as well as other strategic roads across the country.

He also expressed delight with the approval of N213 bn Nigerian Electricity Market Stabilisation Facility aimed at easing some of the challenges in the electricity industry value – chain.