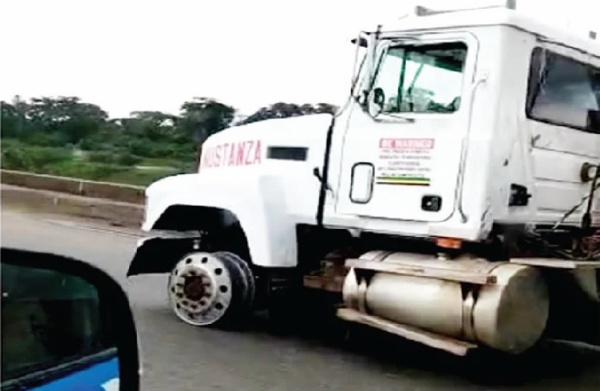 FRSC said that the driver refused to stop to change his damaged wheel along the Lagos-Ibadan Expressway.

Following his arrest, the driver was taken into custody by the police, while the vehicle was towed to the FRSC office.

The Federal Road Safety Corps (FRSC), Lagos State Command, on Thursday, arrested a truck driver who drove on a damaged wheel along the Lagos-Ibadan Expressway.

According to the Command, all efforts to stop the driver to attend to the damaged wheel were abortive. Instead, the driver continued to drive, damaging the newly built road.

The truck, with number plate JHN287XA, was later forcefully stopped by security agents consisting of armed military men as well as policemen at the Long Bridge, Warewa end of the road.

The Lagos State Commandant of the FRSC, Olusegun Ogungbemide, told PUNCH Metro that the driver refused to stop when he was flagged down at Berger.

“Efforts made to caution the driver and make him park to attend to the damaged wheel (were abortive), the driver refused to park. Instead, he continued with his movement, damaging the newly built road.

“We called for a backup team of FRSC operatives that were detailed for traffic control at Fatgbems U-turn, but all efforts to stop him proved abortive as the driver became obviously dangerous, drove through the long bridge and even veered off the road into a road shoulder at Fatgbems.

“The vehicle eventually got impounded with the intervention of armed military men as well as policemen led by the DPO of Warewa division.”

Following his arrest, the driver was taken into custody by the police, while the vehicle was towed to the FRSC office at Mowe, Ogun State.

Hamzat explained that the FRSC had issued a referral letter to the driver for psychological evaluation. He added that he would be directed to the Federal Ministry of Works and Housing to pay for the damage to the road.