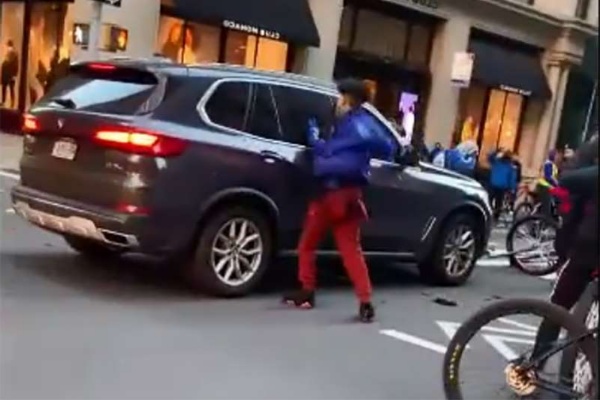 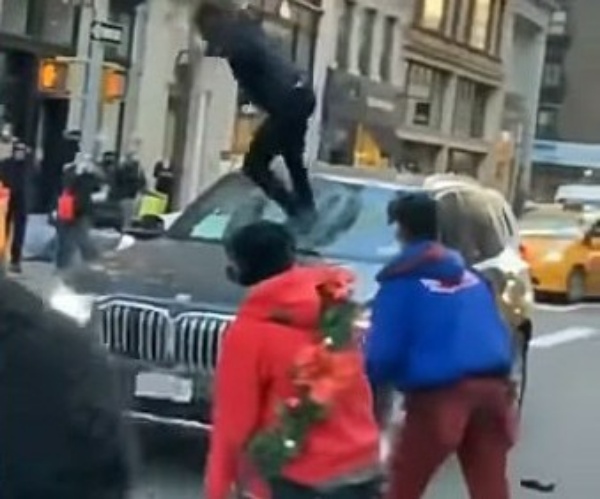 A 15-year-old boy has been arrested and charged as a juvenile after he and other teen cyclists allegedly vandalized a driver’s BMW SUV in broad daylight on Fifth Avenue, in Manhattan.

According to the driver, Max Torgovnick, he and his mother were heading to his father’s neurology office on Tuesday when one of around 50 bicycle gang grabbed his car to use it to pull themselves along.

Torgovnick said the attack followed his decision to slow down – with the intention of letting the cyclists by – which resulted in one of the cyclist crashing into the back of his car.

“I started to open up the driver door but I was immediately surrounded on every side by these kids that have just gotten off their bikes and they started screaming, yelling, punching the car, hitting the hood of the car, just yelling, ‘get out, get out, open the roll down the window, roll down the window.’ When I didn’t, they started to take out their aggression on the car itself,”

Footage of the disturbing attack shows the angry bikers pounding his BMW with their bikes and fists. The clip also captured the moment one of the attackers jumped on the bonnet and kicked the windshield until it cracked.

“But it was only once they started smashing the windshields as soon as the windshield broke, and the glass hit our faces and landed in our laps and I realized, like the ceiling is collapsing,”

“And if they jump on it one more time they’re going to gain access to the car.”

“At that point, I was afraid that they were going to break the window, get in the car, reach in, and pull us out,”

Gang of teen bicyclists smash a 2019 BMW SUV in Manhattan

Torgovnick recalled that his mother, who was in her 70s, was frantically dialing 911 while screaming, “We’re going to die, they’re going to kill us,”

According to the NYPD’s official Twitter account, the teen — who is not being identified because he’s a minor — and his gang are wanted for criminal mischief.