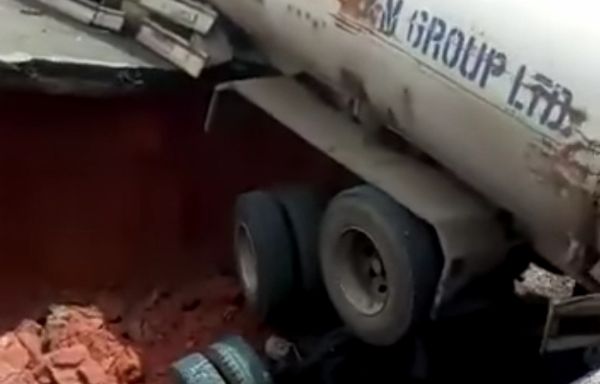 The diesel-laden tanker was driving on the newly constructed road when the giant sinkhole suddenly opened up.

The position of the trailer caused some of its content to spill inside the sinkhole as well on the road. 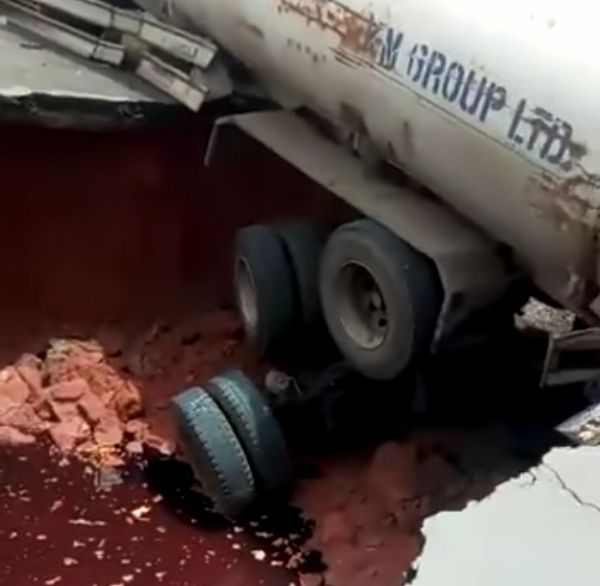 A tanker truck ferrying Automotive Gas Oil, also known as diesel, was nearly swallowed by a giant sinkhole on Wednesday after a newly constructed road collapsed in Owerri.

The diesel-laden semi trailer truck was reportedly driving on the newly constructed Onitsha-Owerri federal highway when the giant sinkhole suddenly opened up and swallowed it.

Early reports suggests the huge sinkhole, which is basically a ground erosion underneath a structure, was caused by a badly done work by the Chinese contractor who handled the road project.

Footage taken at the scene shows the semi truck still hanging above the ground while the fuel semi trailer and its ‘damaged wheels’ sat inside the nearly 3m (9 feet) deep sinkhole.

The position of the trailer and probably a ruptured fuel tank caused some of its contents to spill inside the sinkhole.

No injuries were reported, but the incident caused a massive traffic build, which resulted in some commuters trekking to their destinations.

Nigeria Police Force Emergency Numbers In All 36 States And FCT