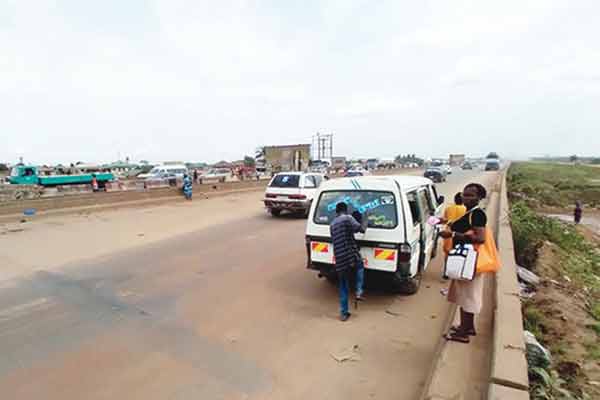 Respite is not in sight for motorists and commuters plying the Long Bridge, Ogun State end of the Lagos-Ibadan Expressway, as hoodlums have continued to launch attacks on users of the road.

PUNCH Metro learnt that despite efforts by the police and the surrounding communities to end the scourge, including hiring vigilantes and installing solar-powered lights on the bridge, robbers still found means of dispossessing people of their valuables.

The Long Bridge is a five-kilometre bridge stretching from the Warewa end of the Lagos-Ibadan Expressway to the OPIC/Kara end of the road.

Hoodlums have been known to hide under the bridge and attack people after their vehicles break down or there is a traffic jam, especially at night and early in the morning.

After robbing their victims, they sometimes club others and leave them for dead.

Some others have been kidnapped on the bridge, including a bus driver, Ahmed Adepoju, who was abducted on March 5, 2021, after his vehicle broke down.

Our correspondent gathered that the usual victims were residents of the host communities of Arepo, Warewa, Banku, Mokore, Arigbede and Magboro.

“She actually had a fuel gauge problem and so didn’t know when her fuel ran out. She was lucky to get a known face from Aribido with a motorcycle, who helped her to buy fuel.

“As fate would have it, as soon as the fuel was poured into the tank and the engine started, out of nowhere, some Fulani herdsmen (from her description), appeared and one opened the driver’s side door and lunged at her with a dagger, trying to stab her. Thank God for his goodness, she said she didn’t know how she dodged the descending knife by mere inches and stepped on the throttle at the same time as she sped off to safety. She didn’t stop until she got to Matrix fuel station before she could get herself together and catch her breath.”

Another resident said there had been an influx of some people from a particular region of the country, who were settling around the Pipeline Road, Unity Estate, Arepo.

He noted that while one happened around 1.30pm, the other occurred around 6pm.

He stated, “The Long Bridge has become a menace to people living in that corridor, particularly those in Warewa, Arepo and Magboro. We have made several attempts to stop the attacks. We even went to the extent of building a house for the police at the Warewa Division. We also bought patrol buses for the police. But the police are not well equipped and their number is not sufficient. They don’t have enough men to patrol the bridge.

“Recently, a concerned resident donated some equipment to be installed on the Long Bridge so that we could have the place illuminated. Despite this, the bad boys continue to operate there. This is because under the bridge accommodates them. They usually jump out of the place to attack motorists. As it is now, we are in danger and we are afraid.”

He asked the government to station patrol vehicles on the bridge and secure the lives of users.

The President, Arepo Residential Community Development Association, Mr Bode Adefolu, confirmed the attack on the female motorist, adding that the security situation on the bridge was a serious cause of concern to residents.

He noted that the community was searching for experts, who would install proper security lights on the bridge.

“We also need to increase the number of security patrols on the bridge. We have employed 10 security guards already, five during the day and five at night. But we need more. On June 11, the Police Community Relations Committee approached the Ogun State Government to assist us with Amotekun, which is part of what we are looking forward to now,” he added.

A senior police officer at the Warewa Division said the police got a report of an attack on the bridge last Tuesday.

The officer, however, noted that the hoodlums were repelled.

“There is no high incidence of attacks on the bridge as claimed,” the officer added.

According to him, there has not been any official complaint for the past three months.

“We know how many people we have arrested on that bridge and those who have lost their lives during exchange of gunfire with our policemen. Our policemen are always there to ward off any form of attack in that place,” he added.

Amaechi: ‘I Am Not Aware That I Suspended NPA MD’