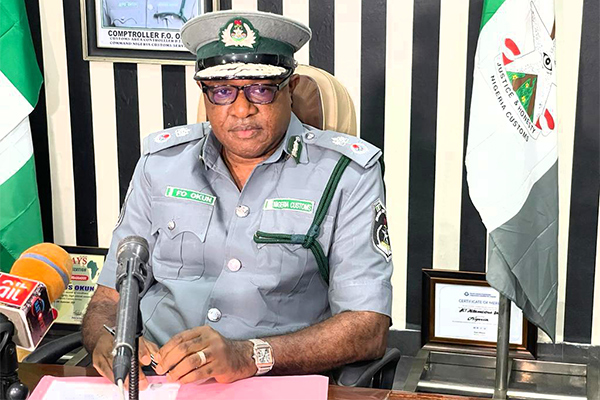 He said the secret behind the successful implementation of the VIN Valuation was constant consultations with the stakeholders at the command.

Okun added that his command collected a total of N117. 5b into the federation account as half-year revenue for January to June 2022.

Speaking with DAILY TREND at the command in Lagos on Thursday, Comptroller Okun said the secret behind the successful implementation of the VIN Valuation is constant consultations with the stakeholders at the command.

“I carry everybody along and consult widely, I never undermine anybody that they are too small, constant interaction and sensitization has helped us out a lot in successes of the VIN Valuation

“The Importers or agents write an application for the Non-Standard VIN using the 846 code, immediately the application gets to me, I sign it, and it goes out, I do not keep any VIN application overnight,” he said

When the VIN Valuation was deployed in March 2022, it was met with a lot of resistance from importers and freight forwarders due to the astronomical increase in duty payment on vehicles by as much as 300percent.

However since it was recalled by the customs high command, adjusted, and redeployed in May 2022, PTML Command has gotten a smooth sail with the implementation of the scheme.

A testimony of the wide acceptance of the VIN Valuation at PTML Command is the increase in its revenue target for the same month of May 2022. The command generated N22.5billion which stands as the highest revenue generated in the months of May since the command was created.

Also speaking, the spokesman of the command, Mr. Muhammed Yakubu confirmed that the VIN Valuation Implementation has increased the revenue of the command.

“To prove that the VIN Valuation is becoming more friendly, we have generated a total of N27billion in the month of June, this is the highest since the creation of PTML Area Command”

“VIN Valuation has not come to be a challenge, it has come to modernize our processes and procedures, it is a technology aimed at helping us get the actual and appropriate value of imported vehicles.

“It is a process that is taking away discretion from everybody and valuation officers, you can no longer have that power of discretion.

“Before now, an importer can bring a car which values worth N1million, out of discretion, you could give him N800,000 based on your relationship, but this VIN Valuation has taken that away from everybody.

“As long as you have your standard VIN and input your transaction value, it would pop out what you should pay. If you are having a nonstandard VIN, this would lead you to write an application, and send it to the customs area controller, these are the ones that use 846, the Area Controller sends your application to the valuation department where you would be given the actual value you supposed to pay.

A month-by-month breakdown of the cumulative collection in January, February March, May, and June this year manifested increases ranging from 3 percent to 28 percent.