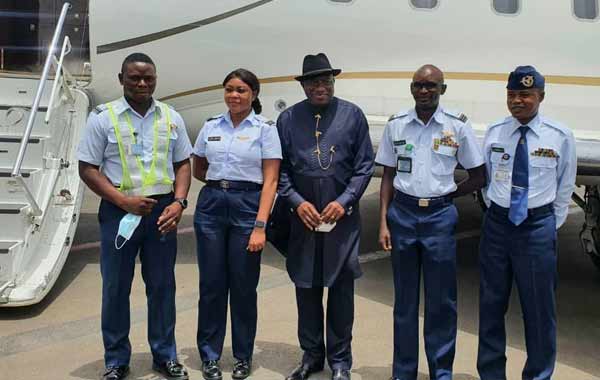 Mr Jonathan arrived Bamako on Sunday as part of the ECOWAS team engaging the government and people of Mali as they seek return to democracy.

The ex-president shared his excitement in a tweet, saying:

“I am pleased to have been flown to Bamako, Mali, by a pair of Nigerian Airforce pilots one of whom is Blessing Liman, a committed NAF flying officer who emerged as Nigeria’s first female military pilot under our administration.”

On December 9, 2011, Liman was commissioned into the Nigerian Air Force (NAF) as a flying officer, alongside 126 direct short service course 20\2011 cadets of 325 ground training group in Kaduna.

“I’m ready to reciprocate the confidence put on me by the nation,” she had said after the ceremony at the NAF base.

Nigeria’s first-ever female combat helicopter pilot was Tolulope Arotile who died on July 14, 2020 aged 24 at the NAF base.