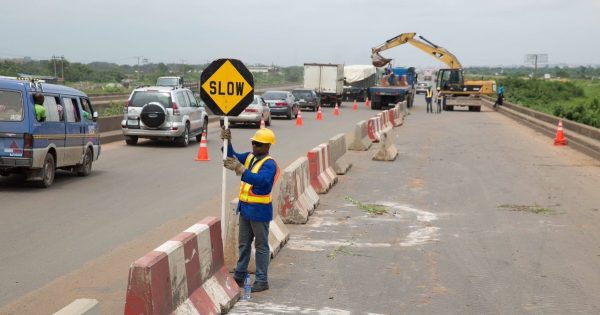 Julius Berger Nigeria Plc., the construction company reconstructing the Lagos to Shagamu section of the Lagos /Ibadan Expressway has promised to open all diversions within the section during the Yuletide.

According to The Sun,  the Ogun Sector Commander of the FRSC, Mr Clement Oladele, disclosed this at the flag-off of the `ember’ months’ campaign organized by the Ifo Command at the Ifo Motor Park on Thursday.

He said that this was to ease traffic congestion during the period.

The News Agency of Nigeria (NAN) reports that the campaign was entitled: Safe Driving, Safe Arrival.

Oladele said that Mr Olaf Thamm, the Project Engineer handling the construction, disclosed this after a meeting with the FRSC team on Wednesday.

“The construction company has also promised to open fairly motorable sections on the Lagos/Ibadan Expressway.

“This is to ease the pains and discomfort that such may inflict on motorists travelling during the festive period.’’

He added that the construction company would also rehabilitate all the bad portions on the road that had been causing gridlock.

The commander said that the step was part of the preparations toward hitch-free festivities and to reduce gridlock on the road during the period.

Oladele warned motorists to be cautious and adhere strictly to recommended speed limits around the construction sites.

He also implored motorcyclists to always wear their helmets to avoid unnecessary loss of lives.

The Ifo Unit Commander of the FRSC, Mr Joshua Ibitomi, said that the campaign was timely.

Ibitomi added that this was because the FRSC usually recorded an increased in vehicular and human movements in the last four months of every year.

He said, “Motorists should avoid dangerous driving, use of alcohol, overloading, speeding and the use of expired tyres to stay alive during the Yuletide. ” he said.

The commander also admonished road users, motorists, tri-cyclists and pedestrians to be cautious while using the roads.

Culled from The Sun.