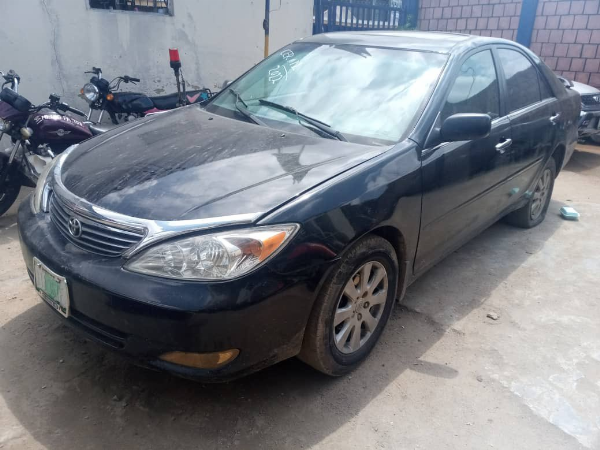 Lagos Police recover ‘stolen Toyota Camry’ from suspected robbers at 2.30 am in the Ijora-Badia area of the State.

Police urged the owner of the suspected stolen vehicle to come forward with proof of ownership to claim it.

Police officers on patrol around 2.30 am on Friday recovered a black 2002 Toyota Camry sedan from fleeing suspected robbers in the Ijora-Badia area of Lagos State.

The spokesperson for the Lagos State Command, SP Benjamin Hundeyin, revealed this on his verified Twitter handle on Saturday.

According to Hundeyin, the officers, based on suspicion, gave the occupants of the vehicle a hot chase, following the driver’s refusal to stop after being flag down.

“Yesterday, at about 2:30 a.m., a black 2002 Toyota Camry V6 saloon car, with reg no JJJ 367 FJ, with about three occupants, was flagged down by officers of Ijora-Badia Division on routine patrol. The driver sped off and turned into an adjoining street,”

Hundeyin said the police later met the vehicle abandoned and that all the occupants had fled, adding that the vehicle had been recovered and taken to the station.

He urged the owner of the suspected stolen Toyota Camry to come forward with proof of ownership to claim the vehicle.

“The police gave chase and met the vehicle abandoned. All occupants had escaped. Vehicle has been recovered to the station. We urge the owner of this suspected stolen vehicle to come forward with proof of ownership to claim the vehicle.,”

Evolution Of Hyundai Santa Fe From 2000 Till Date