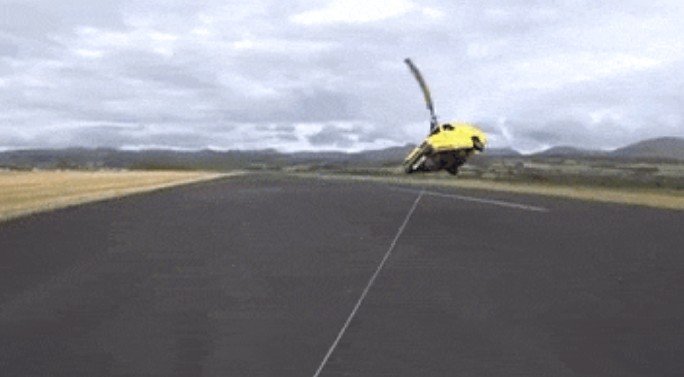 We all know that the Reliant Robin,the small 3-wheeled car, is ridiculously prone to toppling over on every curve on the road.

This fact didn’t turn this man and his fellow experimentalist off as they attached a gyrocopter (giant powerful fan that propels a helicopter) to the top of the 3-wheeler to make it fly.

Then the Reliant Robin was towed to a certain speed which gave it a little lift before crashing to the ground.

They will need to go back to the drawing board on this project because there’s a reason why helicopters have two rotors. While the one on top provides lift and directional motion, the one on the tail helps it to steer properly.

Nice try and i believe the Wright Brothers must’ve suffered several of such fails before achieving their first sustained and controlled airplane flight.

Related Topics:3-wheeledcarcrashGyrocopterhelicopterReliant Robin
Up Next

This Porsche 911 Was Made With Quadricycle,Cardboard,Plastic Pipe And Duct Tape