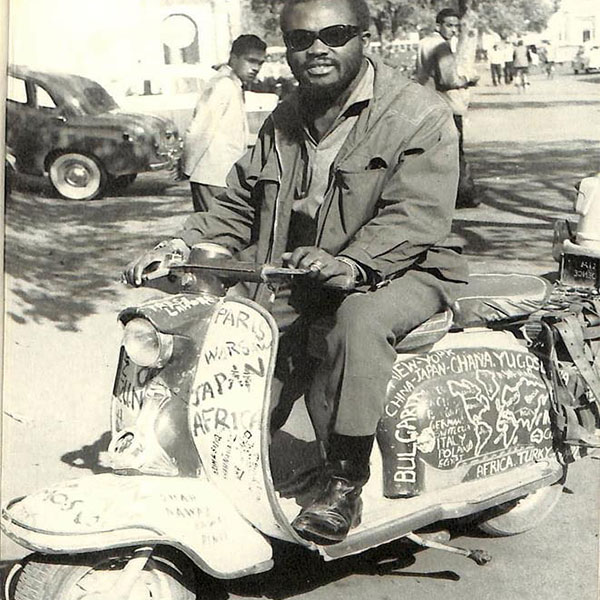 Many Nigerians who had listened to the popular song “Ajala traveled all over the world” by Nigerian juju artiste, Ebenezer Obey, would have loved to know more about him and his journey.

Born Mashood Olabisi Ajala, Ajala happened to be the first Nigerian and African to tour round the world with his Vespa Scooter.

He was a freelance journalist born in Ghana and raised in Lagos, Nigeria. These is how he journeyed and was able to cover the world with his mini bike.

At 18, Ajala sailed for the USA arriving in New York City in August 1948. He had little money to live on, but earned a Lutheran scholarship with which he studied at Augustana College in Rock Island, Illinois then later at Roosevelt University in Chicago and Columbia University in NY. He supported himself with odd jobs; even as a Hollywood film extra.

In the 1953 film ‘White Witch Doctor’, he was cast alongside Robert Mitchum, recommended for the part by his actor friend Ronald Reagan). 20th-Century Fox movies produced the movie. He was deported from the US after an angry girlfriend reported that his visa had expired. 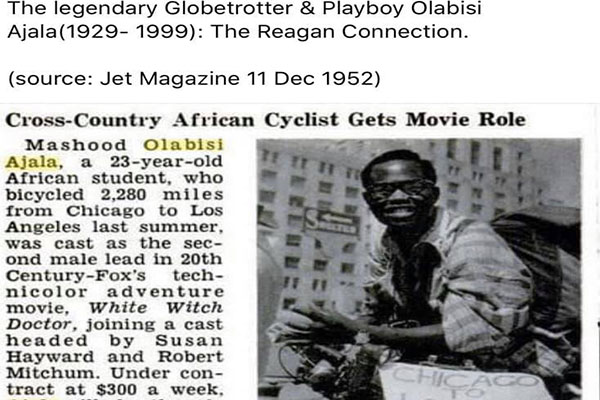 On April 27, 1957, in London, Ajala, a 26 year old student of psychology, embarked on a trip across 40 countries through Europe, Asia and Africa.

This journey was actualized with his Vespa scooter, wearing his full conspicuous agbada regalia with a cap to match.

As a pre-medical student, Olabisi had previously undertaken a similar short journey four years earlier in the USA, pedalling from Chicago to Los Angeles on a bicycle, covering 3,800 miles in 35 days over ten cities.

His journey, which he nicknamed “This Safari”, covers 30,000 miles across 40 countries in nine months and return to London afterwards.A

In all, Ajala spent six years journeying through 87 countries. His accounts of his travels and his activities as a free-lance journalist brought him fame at home, and he became known as ‘Ajala Travel’, which Ebenezer Obey famously sang about.

His remarkable story includes many meetings with the world leaders of the time. The journey opened many other opportunities to him. Russian Premier Nikita Khrushchev ensured him a visa to ride from Berlin to Moscow. He also rode across the Middle East and Egypt. These were where he interviewed President Nasser before heading in to Israel to meet Prime Minister Golda Meir. Then he went to Iran meeting the Shah, then to India meeting Pandit Nehru.

His travels through much of Asia involved meetings with Prince Sihanouk of Cambodia and Chiang Kai-Chek in Taiwan. He wrote of the racism he encountered among Hindu’s, and of  Australia. These were where he found democracy and equal treatment for all, except Aborigines. Additionally Ajala was a known notorious philanderer. Ajala died in Lagos in 1999.

In his book “An African Abroad”, Olabisi narrated his encounter with the then president of Egypt, Gamal Abdel Nasser:

“Every day at 6 am for the next two weeks, I was waiting directly in front of his presidential palace hoping he would come out. On the 13th day of my hitherto unpromising efforts, around 5 pm President Naseer emerged from the interior of his residence heading for his car.”

In his agbada, the heavily bearded Olabisi screamed as loud as he could and caught the attention of the president. He received heartily welcomed from the president.

Crossing Lebanon on his way to Israel, the Lebanese security force arrested him. The belief was that he was on an espionage mission for the Israeli. He knew crossing of any border between Israeli-Arab frontier would be a death wish. However, he dared to continue his journey as this was the heat of the Israeli-Arab war. 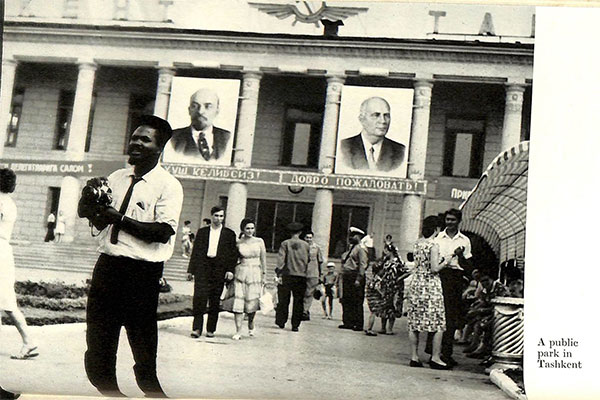