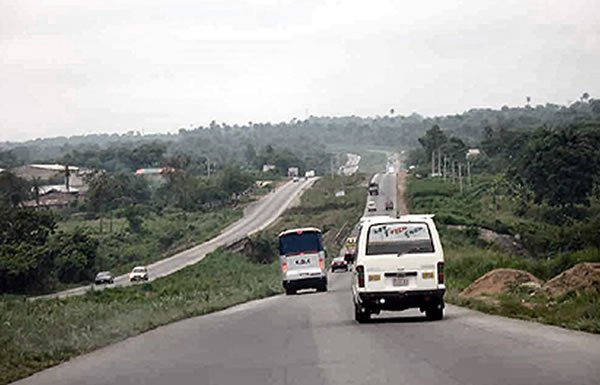 Picking people on the highway, read this and share.

A brother shared this testimony in the church today.

He was travelling to Warri and he had a very busy night and was feeling dizzy while driving but the trip is a must because he must catch up with an appointment in warri.

He said he is not in the habit of picking people on the highway, but he needed someone whom he will be discussing with to prevent him from sleeping while driving.

Luckily for him, when he got to Choba brigde he saw two young ladies standing by the roadside waiting for a car, they waved at him and he quickly stopped.

The lady: Sir please will you get to Mbiama junction?

The man: Yes but I can only carry one person

The lady: Ok no problem sir, I just met her here we are not together.

She joined the man and they drove off, along the line she started acting restless, looking at the man, pressing her smart phone chatting and after a while she started answering calls, though she never said anything in the phone just mmh, mmh uhh, yes, no.

During the calls the man reduced his speed, and started observing the lady. At some point the lady started talking to the man seeking attention and all, he kept quiet and was observing her.

They got to Ahoada, the lady said she want to buy something and the man said he can’t wait.

She went down and the brother drove off and told her good bye, along the line he decided to buy fuel and drove into a Total filling station, while waiting, something told him to search the car especially the area the lady was sitting because she might mistakenly drop a feminine object that he can’t explain to his wife, while searching he saw bunch of Indian hemp wrapped in a brown paper, he quickly picked it up, asked for their rest room, went in and empty the content of the paper inside the toilet, flush and threw the paper inside the waste bin there, bought his fuel and continue his journey, this time around the sleep cleared from his eyes.

They got to Mbiama bridge at the police highway patrol checkpoint where the army check pointed at his car and one other car . His car was thoroughly searched but they didn’t find anything in his car yet they never allowed him to go as they continued with unending search.

Inside the other car they find Indian hemp under the seat, the man couldn’t explain how it got into his car. Later he said he over-heard the man pleading and telling the police man he picked one lady at Choba bridge, probably the lady never knew it fell off from her bag.

Later the brother excused the man and asked him the cloth the lady was wearing and where she dropped, behold it’s the lady standing with the one he picked earlier and she stopped at the same Ahoada but he was smart enough to search his car after she dropped and discovered bunch of Indian hemp wrapped in the same paper similar to the one he thrashed in the toilet at the filling station.

He realized it was a set up but to avoid paying for what he cannot substantiate he kept quiet until they asked him to go and took the other man to their station, only God knows how they settled.

For the single men and married men driving on the high way do not pick strangers.

Think twice before picking random people on the highway.