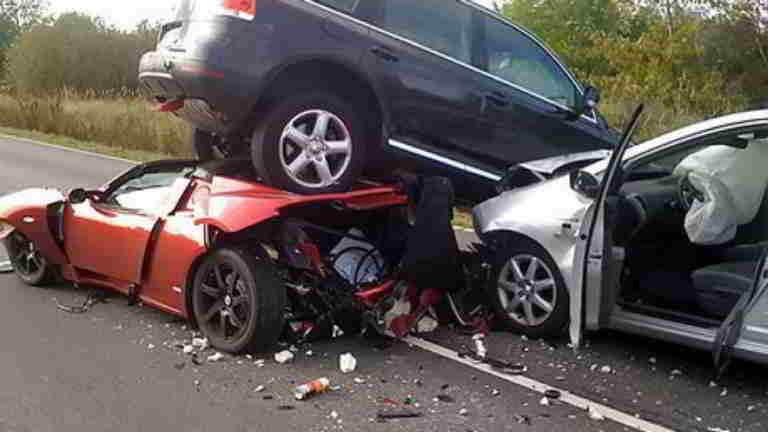 Some of the images show obvious mistakes,while others will leave you thinking:How would you do that?

This list of the weirdest car crashes show cars you see on an everyday basis,but in positions you could never imagine.A lot of us have been close to making a big mistake while driving and these images of crazy car crashes is an example of what could have happened.

A 1,500-pound wrecking ball broke loose and bounces down road damaging more than a dozen vehicles.

A Chinese motorist,Yu Lin,from Nanyang had a lucky escape when his mini bus plunged down a sheer drop off a mountainside road and was ‘caught’ by a passing lorry.He was on his way to collect his five-year-old daughter from a friend’s house when his bus skidded on a mud patch and careered over the drop.

This accident occurred in New York City in August 2011 when a sanitation worker lost control of a garbage truck and crashed through the third floor of a maintenance facility,sending a shower of heavy concrete raining down on the street.At least two cars were crushed by the wall fragments,but no passers by were hurt.The driver was eventually freed and taken to the hospital with minor injuries.

Nearly every bridge these days has a height warning listed near them.If your vehicle is higher than what is listed in the warning,dont drive under the bridge.
It seems that warning was lost on one driver delivering new cars to a dealership.

A lorry driver had a miraculous escape in China after an accident left his cab hanging precariously over the edge of a flyover.The truck appeared to be defying gravity as it dangled 100ft above the ground in Chengdu. The container later crashed to the street below but the driver’s cab somehow managed to avoid having the same fate.

Watch the silver saloon car in front of the driver with the dash cam.About 20 seconds in, she slams on her brakes,opens the door and gets out the car.

Then moved quickly to the central reservation and watches as her car takes off into the path of the oncoming traffic on the other side.

The woman behind caught the whole thing on her dash cam and put it up on youTube so we could all wonder what the hell was going on.

According to the San Gabriel Valley Tribune in California,the driver was 22-year-old Jasmine Lacey,who was taken to a hospital for ‘a non injury-related reason’.

A police spokesman said: ‘(Lacey)was later contacted and identified at St.Jude Medical Center facility and,after investigation of the traffic collision,was arrested for DUI(Driving under the influence).
It is understood she was released due to lack of evidence.

The driver of this lorry was left sweating with humiliation after he crashed his cargo of deodorant cans into a railway bridge today.
The heavy goods vehicle slammed into the bridge,leaving the trailer mangled and the cab wedged under the overpass.
The stunned driver had to jump down from the lorry after the crash left its front wheels suspended 4ft from the ground.

A car carrier full of SUVs(about 21)almost fell over the edge of a tall bridge in china.Luckily,only the cab part of the truck went over,so the weight of the trailer and its cargo stopped the vehicle from falling.

A lorry driver ended up with a face as red as the cab of his truck after a satnav blunder left him stuck in a narrow alley in the village of Bruton,Somerset.

You can’t park there!
Lewis Richardson,a 22 driver who crash landed his Audi TT into the side of a house was charged with drink driving.He spent a number of weeks in hospital with head injuries.
Three people were asleep inside the house at the time but were miraculously unharmed despite the severity of the crash.

Probably preparing for the summer Olympics

Tesla Roadster vs Toyota Prius vs Volkswagen Touareg
According to Tesla spokeswoman Rachel Konrad who,the Roadster was stopped at a red light behind a truck and was hit from behind by a Volkswagen Touareg driving at 80km/hour at the time of impact.The Roadster driver walked away with minor bruises.

Another theory say that the third car involved in the accident,a Toyota Prius,hit the Roadster, pushing it under the Touareg.As you can see from the pictures there is indeed a a piece of the Roadster jammed under the rear bumper of the Touareg.

Having a walk on the stairs

Ford F-150 Accident on a ferrari

How fast do you have to be going to slice a bridge in half?
The Excavator(Backhoe)was knocked off the trailer after hitting a overpass(flyover)near Hays,Kansas.Two girders on the bridge were badly damaged.

This particular accident happened on Acme road,Ikeja,when a woman suddenly
reversed her SUV,thereby climbing over an Honda passing by.It was a serious accident,but no life was lost.

ON THE ROAD TO SUCCESS,
THERE ARE NO SHORTCUTS
Really

Caption=Collect/Kent News & Pictures Ltd/(01622) 755133A BMW car driver has an unfortunate accident in the Kent village of Sarre over the bank holiday weekend.

Thank you for driving carefully through the village

A driver lost control of his SUV before skidding off the road and onto the roof of a house in Taizhou,a city in China’s Jiangsu Province