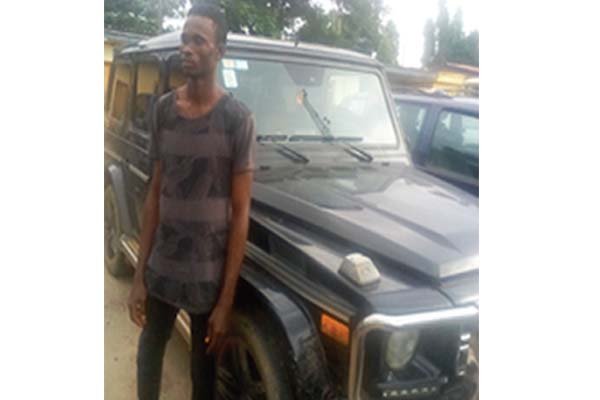 Detectives attached to the Special Anti-Robbery Squad (SARS), Lagos State Police Command, have arrested a man, Andrew Agofure, suspected to have burgled a house at Lekki-Ajah area of the metropolis and stole a Mercedes Benz G-Wagon valued at N37 million.

But Agofure has denied the allegation. Police said they were also looking for another suspect, identified simply as Patrick. The police believe that the fleeing Patrick masterminded the robbery.

When we discovered that it had been placed online for sale, we swung into action.

The police alleged that Patrick drove the vehicle from Lekki-Ajah in Lagos State to Nasarawa State. The police disclosed that the SUV, which was N37 million, was placed on the online mart for N15 million.

According to NewTelegraph, the team of detectives that cracked the case was led by a Deputy Superintendent Police (DSP), Mr. Akinola Aduroja.

Aduroja said: “We posed as buyers that wanted to buy the G-Wagon for N15 million. We arrested the suspect when he came to sell the SUV to us and the vehicle was recovered in a forest in Nasarawa State around midnight.”

Aduroja said that on August 22, about 7.30p.m., Muiz Adebayo Ajayi, of No. 10A, Lucky Garden, Road 17, County Homes, Lekki-Ajah, Lagos reported a conspiracy, burglary and stealing to the Lagos State Commissioner of Police, Mr Imohimi Edgal, through a petition. The petitioner alleged that he travelled to Kenya and upon his return on August 20; he discovered that the main gate to the compound had been broken by unknown persons.

Ajayi added that one G-Wagon, with registration number BGD 2 EV and some electronics valued at N1.2 million were stolen from the house of his elder brother, Adekunle Odunlami, who was in Malaysia. In a bid to track down those that burgled the Lekki-Ajah home of the complainant, Aduroja and his men posed as buyers.

On September 6, Agofure appeared to pick the cheque for the car and was grabbed. Since Agofure’s arrest, police have been looking for Patrick. But Agofure said he did not know anything about the robbery. However, he said a man, Tony, who he met at a cybercafé and became friends with, taught him how to hack into different sites.