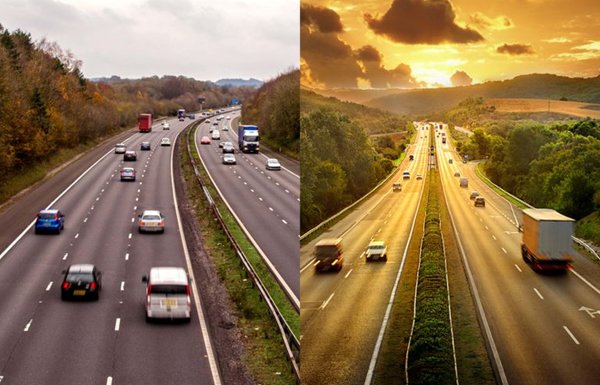 Originally, almost everybody traveled on the left side of the road, according to BBC America. However their mode of transport was quite different from today: Think four legs instead of four wheels. For Medieval swordsmen on horseback, it made sense to keep to the left to have their right arms closer to their opponents. (Presumably the 10 to 15 percent of left-handed knights just had to make it work.) Mounting and dismounting was also easier from the left side of the horse, and safer done by the side of the road than in the center.

So perhaps the question here should be, why did people stop traveling on the left?

Things changed in the late 1700s when large wagons pulled by several pairs of horses were used to transport farm products in France and the United States. In the absence of a driver’s seat inside the wagon, the driver sat on the rear left horse, with his right arm free to use his whip to keep the horses moving. Since he was sitting on the left, he wanted other wagons to pass on his left, so he kept to the right side of the road.

The British Government refused to give up their driving ways, and in 1773 introduced the General Highways Act, which encouraged driving on the left. This was later made law thanks to The Highway Act of 1835. Meanwhile post-revolution France, under their left-handed ruler Napoleon, embraced a permanent move to the right side of the road. Amidst all this driving confusion, the British and the French were yielding their power across the globe, and as part of their rapid colonization they insisted that the countries they occupied drove on the same side of the road. This explains why former British colonies such as Australia, New Zealand, and India use right-hand drive cars, while former French colonies like Algeria, Ivory Coast, and Senegal left-hand drive cars.

When Henry Ford unveiled his Model T in 1908, the driver’s seat was on the left, meaning that cars would have to drive on the right hand side of the road to allow front and back passengers to exit the car onto the curb. According to National Geographic, this influenced a change in many countries: Canada, Italy, and Spain changed to left-hand drive cars in the 1920s, most of Eastern Europe followed in the 1930s and Nigeria also followed suit. However British drivers remain on the left side of the road with right-hand drive cars, and this is highly unlikely to change.

Hyundai and Kia To Recall 240,000 Cars Over Whistleblower Complaint