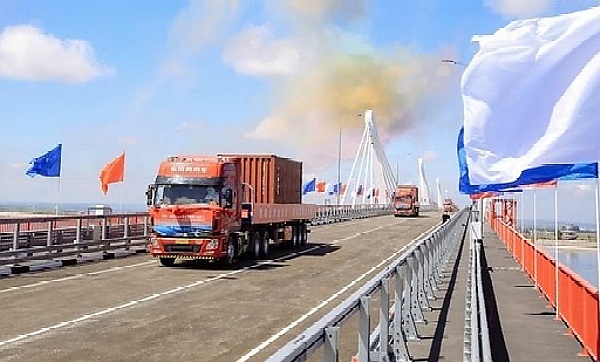 The first freight consignment from Russia to China consisted of local soybean oil and sawn materials.

Construction of the 1,080 metres long bridge began in December 2016.

Each party (Russia and China builders) built exactly one half, or 540 metres. 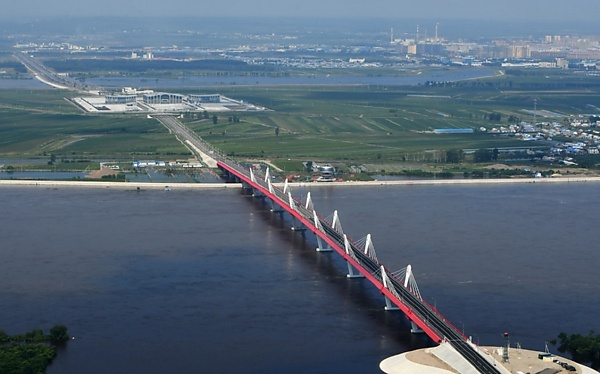 The new Blagoveshchensk-Heihe bridge is a 1,080 metres long cross-border bridge linking Russian city of Blagoveshchensk and the Chinese city of Heihe.

“In today’s fragmented world, the Blagoveshchensk-Heihe bridge between Russia and China has a special, symbolic meaning.

“It will become a yet another line of friendship, connecting the peoples of Russia and China.

“The construction began in 2016, with thousands of people from both China and Russia taking part and working 24/7.” 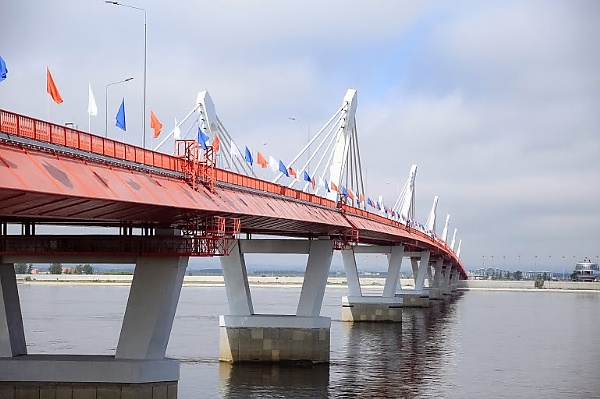 Deputy Premier of the PRC State Council Hu Chunhua congratulated those present at the ceremony on behalf of the PRC Government.

“This bridge crossing is an important transport infrastructure project, to which the leaders of our states have paid special attention.

“I am confident that together we will turn the Heihe-Blagoveshchensk bridge into a bridge of friendship, a bridge of cooperation, and a bridge of co-development,” he said.

Construction of the 1,080 metres long bridge began in December 2016, simultaneously by Russian and Chinese builders. Each party (Russia and China) built exactly one half, or 540 metres.

The sections were built simultaneously from the two banks and were connected in May 2019.

“The opening of the bridge is a historic event. The bridge was ready two years ago, but we had to postpone the opening because of the pandemic. Now we were able to hold the ceremony.

“The new bridge will substantially contribute to the development of trade and economic links between Russia and China. More than 600 freight vehicles will cross the bridge every day.

“Modern checkpoints will be able to clear 4 million tonnes of freight and 2 million passengers per year. We will start with freight transport though.”

Mercedes Cutting Its Dealership By 10% Worldwide, Intends To Move To Direct Sales