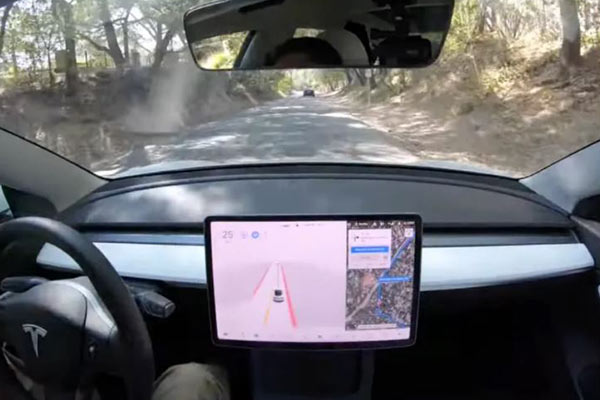 Bernal is the host of AI Addict, which has 8,500+ subscribers, where he reviews Tesla’s Full Self Driving Beta system.

He says that prior to his dismissal he was told verbally by his managers that he “broke Tesla policy”.

John Bernal, a former Tesla employee who reviewed the company’s FSD Beta software on his YouTube channel says he has been fired by the company after posting a video that showed his Tesla hitting a bollard.

Bernal, a former advanced driver assistance systems test operator at Tesla’s Autopilot, is the host of a YouTube channel called AI Addict. He is known for posting videos reviewing Tesla’s Full Self Driving Beta system on Al Addict, which has over 8,500 subscribers.

Bernal says that prior to his dismissal he was told verbally by his managers that he “broke Tesla policy” and that his YouTube channel was a “conflict of interest”. He added that after being fired, his access to the FSD Beta software was revoked.

Bernal said he’d previously been approached by managers after posting a video in March 2021 that showed a number of close calls with pedestrians and cyclists while using the FSD beta software. The video has more than 250,000 views and was shared widely on social networks like Twitter.

Bernal said that after posting the video, “A manager from my Autopilot team tried to dissuade me from posting any negative or critical content in the future that involved FSD Beta. They held a video conference with me but never put anything in writing.”

The FSD Beta gives customers who pay for the company’s advanced driver assist software (branded by Tesla as “Full Self Driving”) access to experimental updates. Tesla says some 60,000 customers are signed up to test FSD Beta on public roads, providing it with invaluable data to improve the software. The company says there have been zero accidents or injuries involving FSD Beta since its launch.

A number of FSD Beta testers post reviews of the company’s software on YouTube, and Bernal says he intends to maintain his channel (though he now needs to borrow friends’ cars to test FSD Beta). As Bernal told CNBC: “I still care about Tesla, vehicle safety, and finding and fixing bugs.”