“I’m down to six miles on the Tesla so I may lose it here in a sec.”

“If someone else is able, can they maneuver into the number one spot?”

Those were the last words from Fremont Police officer during a 120 miles per hour high-speed chase last Friday in the San Francisco Bay Area.

According to the Police department spokesperson:

“This unfortunately happens from time to time even in our vehicles that run on gas, if they aren’t refueled at the end of a shift.”

The Model S police car typically has a 40-50 percent charge remaining after a shift, and according to the department, “We are easily able to make it through an 11-hour shift with battery power to spare.” 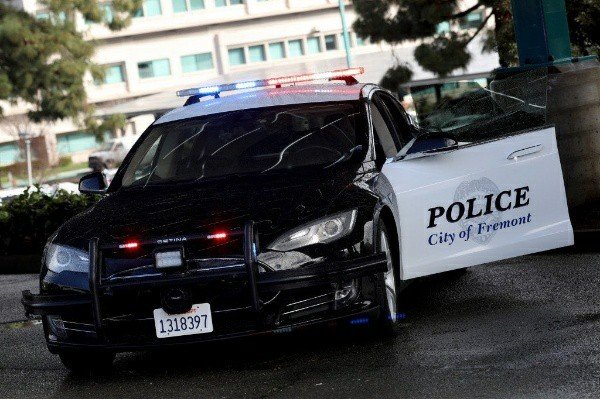 After several modifications, such as the addition of push bumpers, video Camera and siren, the department took delivery of the 2014 Model S cruiser in March this year as part of a pilot program that included a Toyota Prius and Ford Fusion Hybrid.

The 5-door electric car will go over 370 miles or 600 km before running out of battery juice. A Supercharger will give a 85 kWh battery pack an additional 180 miles or 290 km of range in about 15–30 minutes.

Despite the battery-level disappointment, the “felony vehicle” was eventually located after the suspect, who managed to escape, crashed it into the bushes.