What do you wear every time you get in the car that’s thin, smooth, and has saved over a million lives since 1959? That’d be the three-point seatbelt, and you have Volvo to thank for its presence in your car. On August 13, 2019, it turned 60, and it’s still going strong, even if you might take it for granted. Buckle in for the quick history of how the seatbelt came to be in every new car, Volvo or otherwise.

At the risk of sounding like your parents, an annoying public service announcement, always wear a seatbelt. Consider physics: When your car slams into something, it rapidly decelerates. Bodies in motion remain in motion, so if you’re not strapped down, guess what happens when your car stops? You don’t!

Taken out of the physics lesson, this means that the seatbelt keeps you from flying out of a car in a crash. They also keep you from flying into the dashboard, ceiling, or doors in a crash. Basically, there is a lot of anti-you-turning-into-a-projectile going on here.

It is with no shortage of irony, then, that the solution to these flying-occupant issues came from Nils Bohlin. He was a former aviation engineer who, before joining Volvo in the ’50s, had helped develop ejection seats for aircraft. At the Swedish automaker, Bohlin was tasked with putting his specialized knowledge to use. His expertise about extreme forces’ impact on the human body and focusing it on keeping occupants inside a vehicle.

In the late 1950s, passenger safety was generally bleak. If the seatbelt were included at all with a new vehicle, they were usually of the lap variety. While better than no belts, lap belts distribute those decelerative crash forces over a narrower area of your body than a multipoint belt. Considering how, at that time, bare-metal interior surfaces were still the norm. Most occupants were like yolks in an egg, waiting to be scrambled.

Surprisingly, Volvo readily admits there was a nascent three-point belt that preceded its own. Its straps formed a Y shape, with two portions of the belt vaguely mimicking today’s V-shaped shoulder and lap belts but meeting over an occupant’s belly, not at the side of the seat. A third leg of the belt would tie that over-the-tummy intersection to an anchor next to the seat. Trouble is, this arrangement placed a lot of belt over squishy terrain and was too finicky to put on.

Bohlin believed that, while Y-shaped belts marked a step in the right direction in terms of adequately distributing crash forces over a wider area, it was equally important to ensure those forces were distributed across strong areas of the body. So, instead of running belts willy-nilly across occupants’ bodies, Bohlin designed a belt pathway that crisscrosses the most robust pieces: the shoulder, chest, and pelvic bones.

Ease of use was a key consideration, and Bohlin settled on a simple V shape, which enabled users to reach over, grab the buckle, and pull it (and with it, the shoulder and lap portions of the belt) across their body to the latch at the base of the seat. Think about the last time you were on an airplane; even a lap belt, at least one without a wind-up reel, requires two hands to operate. 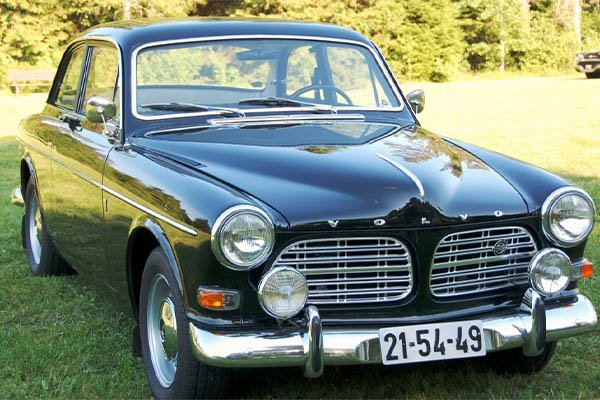 Seatbelt use being what it was in the middle of the past century, it’s unsurprising that the newfangled belt Bohlin and Volvo developed failed to catch on immediately. Even Volvo only installed the three-pointers in the front seats at first; it would take until 1967 for the automaker to add them to its cars’ rear seats.

Volvo sold the first car ever with today’s three-point-belt system to a customer in Sweden on August 13, 1959. The first Volvos sold with the belts were the PV544 (above) and Amazon 120, only in Nordic countries. Volvo thus became the first carmaker in the world to equip its cars with safety belts as standard. After that, Volvo spent years convincing the rest of the auto industry that belts were valuable lifesavers. It put on numerous presentations with live-action crash-dummy demonstrations and cited data and studies proving the belts’ worth. Volvo even tracked down every crash involving its vehicles over one year in Sweden (28,000 crashes in all). They found data supporting unequivocally that three-point belts helped spare drivers and passengers death and reduced injuries by 50 to 60 percent.

Volvo even took out an open patent on the belt design, but it would not enforce any patent violations or charge others royalties to use its three-point belts. This early open-sourcing of its technology hasn’t slowed; Volvo recently announced that it would share its crash research and computer modelling with universities, researchers, and even other automakers so that others can learn from and build on its developments. As Volvo puts it, the company has “continued to prioritize societal progress over financial gain alone.”

The three-point belt has since gained inertia reels (which lock the reel during hard deceleration), pretensioners (which quickly cinch the belts tight during an impact), load limiters (which reduce forces on an occupant’s chest by allowing the belt to pay out in a controlled manner during a crash) and even built-in airbags to distribute loads across a larger area.

Despite those advancements, the three-point belt’s basic design hasn’t changed since Bohlin created it. Today the safety device is required equipment on every new car, truck, and SUV. It is a primary restraint system, as opposed to airbags, which are deemed supplemental restraints, because they supplement the belts. You should wear Bohlin’s device every time you get into a car, because as mundane as it might seem, what happens should you decide not to wear it is anything but.

Daddy Freeze Replies Innoson; Reaffirms The IVM G40 SUV Given To The BBNaija Winner Is Not Fine