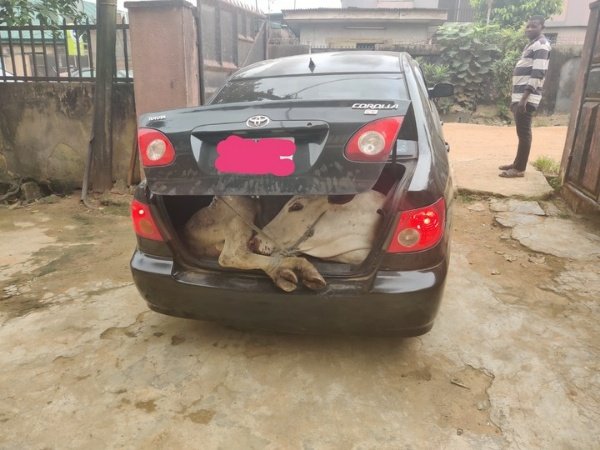 Toyota Corolla sedan spotted carrying a cow in its boot in Eastern Nigeria.

Just when you think you have seen it all, a Toyota Corolla was spotted carring the unthinkable — a full grown cow in the eastern part of Nigeria. 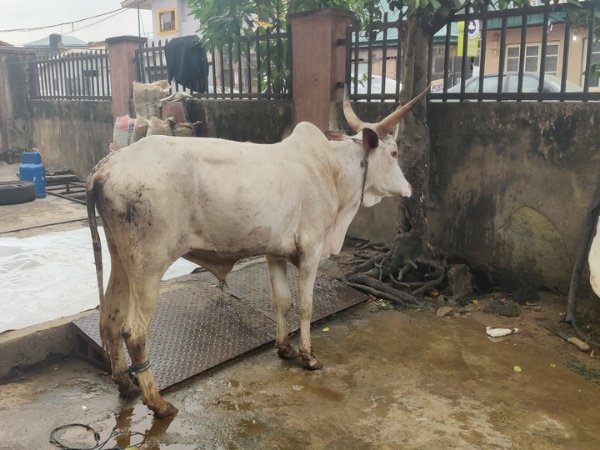 The first of the two shared pictures, which shows the unloaded animal, suggests to ask the question : Can a full grown cow fit into the boot of a Toyota Corolla?

The second picture shows the distressed animal firmly secured in the boot the Toyota Corolla. The scene shows what the whites will call “Animal Cruelty”.

The truth is large animals are not usually transported this way. Hiring a pickup truck at the abbatoir is surely the best way to ferry the poor cow.

But the first question that comes to mind is: How did they manage to load the over 500kg animal into the 371 litres of luggage space?

We are talking about a space that will readily carry 3 large suitcases and few small bags. With a gross vehicle weight rating of 1625kg, Toyota recommends a payload capacity of 490kg for the 1135kg Corolla.

Exceeding the Corolla’s ( or any car’s) payload capacity may damage the car’s suspension. Overloading also makes the car less stable and makes the car more difficult to steer.

Mercedes Benz Delivers More Than 200,000 Vehicles In November For The First Time