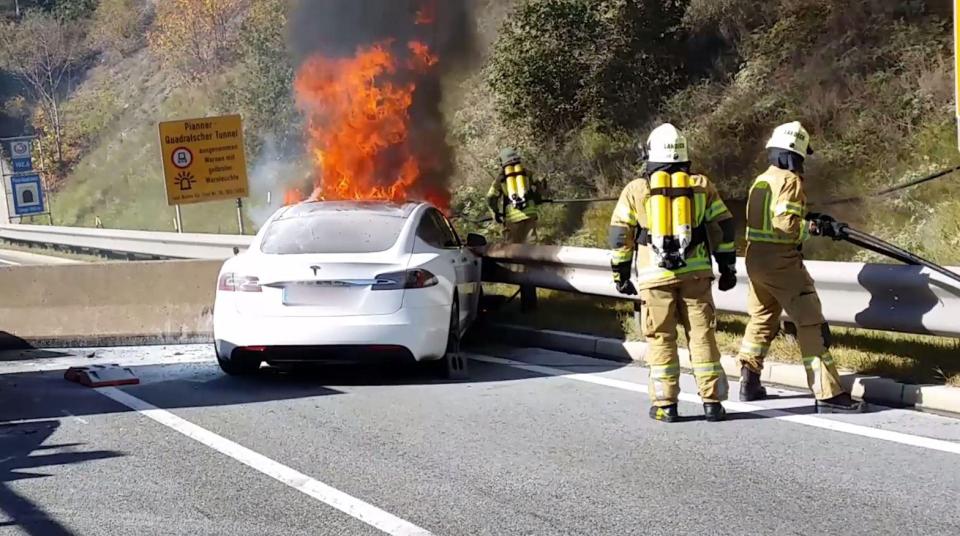 A blazing Tesla has sparked electric car safety fears after firefighters battled to extinguish the inferno.

The Model S was engulfed in flames after its 19-year-old driver crashed into a concrete barrier in Austria.

And fire crews struggled to put out the billowing flames caused by the lithium-ion batteries.

Toxic gases released by the burning power packs meant firefighters had to wear special breathing kit to tackle the blaze.

And while the driver made it out safely, it took five fire engines, 35 crew members and two hours to finally get the fire under control.

The terrifying video shows huge plumes of smoke erupting around the wrecked £50,000 ($69,000) plug-in car as the battery is cooled.

It was only after cutting through the cutting the power supply from the high-performance batteries that it was possible for the firefighters to finally fight the fire.

And the shocking damage of the high voltage fire is revealed with the front end of the hi-tech motor completely wrecked.

And it admits battery fires can take 24 hours to fully extinguish and can easily re-ignite.

It also details the huge amount of water needed to cool the battery, the position to cut through to stop the power – plus the risk of death in touching the power cables without switching it off first.

Sulphuric acid, nickel, lithium, copper and cobalt are all emitted when an electric car goes up in flames making it essential crews have respiratory equipment to hand, too.

Since lithium batteries are used,Tesla recommends that the vehicle be parked under “quarantine” for 48 hours, so that no new fire can break out.”

While the Tesla performed as it should by containing the fire just in the battery compartment,the video highlights the potential dangers of millions of electric cars flooding the highways and the prospect of an uncontrollable blaze breaking out.