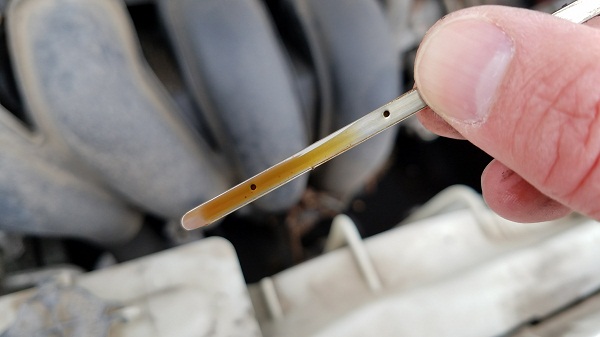 For petrol engines, you might start seeing or noticing some or all of these in your car when you overfill it with engine oil.

Don’t listen to those mechanics who would want to give you one thousand and one reasons why you should use 5-liters of engine oil instead of the 4-liters recommended by the manufacturer of your car. If you continue overfilling, you’ll end up creating more problems for your car.

How to Determine if Your Engine Has Too Much Oil

The quickest way to determine if there is too much oil in the engine is through the use engine oil dipstick. The dipstick has marks to show if your car has too much, too little, or the perfect amount of oil.Develop the habit of checking the level frequently most especially after oil change.

There are other indicators that will suggest you have an overfill problem. This includes blue exhaust smoke, a burning smell, an oil leak, or a high reading on your oil pressure gauge (if equipped). If the engine is running rough or your check engine light illuminates, the cause may be excess oil contacting the spark plugs and causing a misfire.

In case you have too much engine oil in your engine, you’ll need to drain it out or risk harming your engine. If you’re DIY savvy, you can do the draining yourself. If not, head to a competent mechanic workshop and get it done immediately.

Don’t procrastinate doing this for the sake of your pocket.