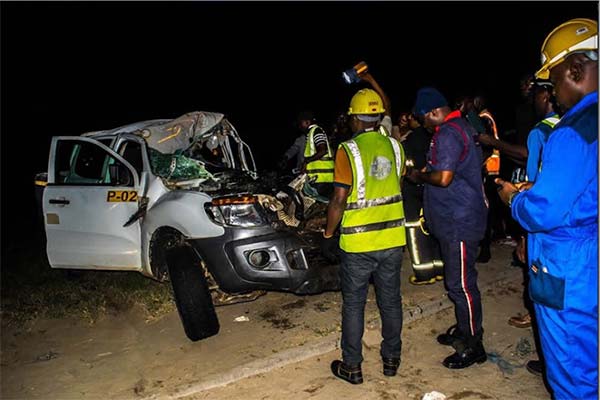 Fatal accident claims 7 lives after a Lexus SUV rammed into a moving truck on Lekki-Epe Expressway.

A fatal accident along Lekki-Epe Expressway Alahun Town in Lagos has reportedly claimed the lives of seven youths. The incident happened after a speeding Lexus sports utility vehicle (SUV) rammed into a moving truck. According to reports, the incident occurred around 1.00am on Saturday.

“A total number of seven adults, comprising two male, 5 female lost their lives in the crash. All the corpses were deposited at the morgue,” Ogungbemide said.

He condoled with the families of the deceased and prayed that God would grant them the fortitude to bear the loss.

Ogungbemide further appealed to parents to always monitor their wards, and should always advise them to avoid reckless driving, over-speeding and driving under the influence of alcohol and drugs, especially when they have reasons to go for social outing.

He said whosoever would drive should abstain from drinking.