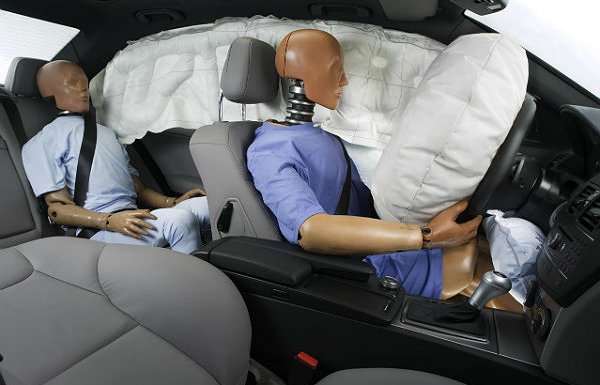 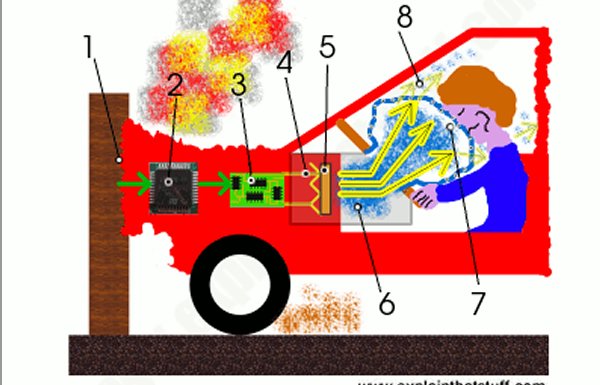 The basic idea is that the airbag inflates as soon as the car is involved in an accident and deflates as your head presses against it. That’s important: if the bag didn’t deflate, your head would just bounce back off it and you’d be no better off.

1)When a car hits something, it starts to decelerate (lose speed) very rapidly.

2)An accelerometer (electronic chip that measures acceleration or force) detects the change of speed.

3)If the deceleration is great enough, the accelerometer triggers the airbag circuit. Normal braking doesn’t generate enough force to do this.

4)The airbag circuit passes an electric current through a heating element (a bit like one of the wires in a toaster).

5)The heating element ignites a chemical explosive. Older airbags used sodium azide as their explosive; newer ones use different chemicals.

6)As the explosive burns, it generates a massive amount of harmless gas (typically either nitrogen or argon) that floods into a nylon bag packed behind the steering wheel.

7)As the bag expands, it blows the plastic cover off the steering wheel and inflates in front/side of the driver and/or passengers. The bag is coated with a chalky substance such as talcum powder to help it unwrap smoothly.

8)The driver (moving forward because of the impact) pushes against the bag. This makes the bag deflate as the gas it contains escapes through small holes around its edges. By the time the car stops, the bag should have completely deflated. 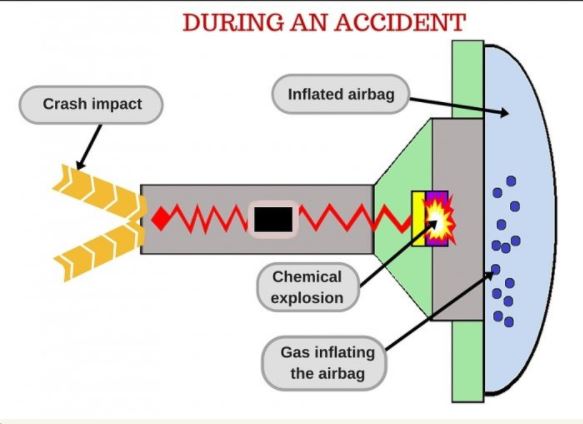 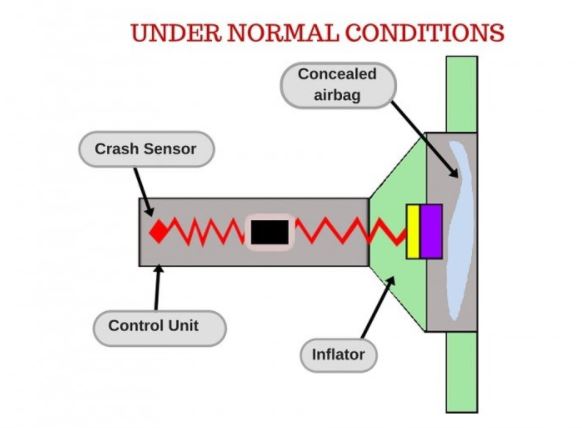 Types Of Airbags:
Airbags come in different shapes and sizes to protect almost every part of the human body in a car accident. There are even airbags to protect pedestrians that one may run into!

The 1987 Porsche 944 Turbo was the first car in the world to come equipped with dual airbags, for the driver as well as the passenger, as a standard fitment. These airbags are mounted on the steering wheel to offer protection for the driver and on the dash, to protect the passenger. 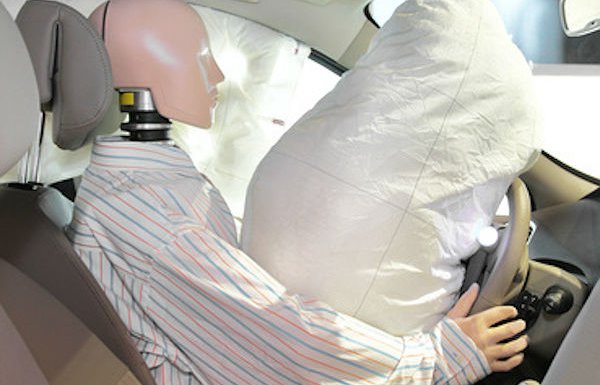 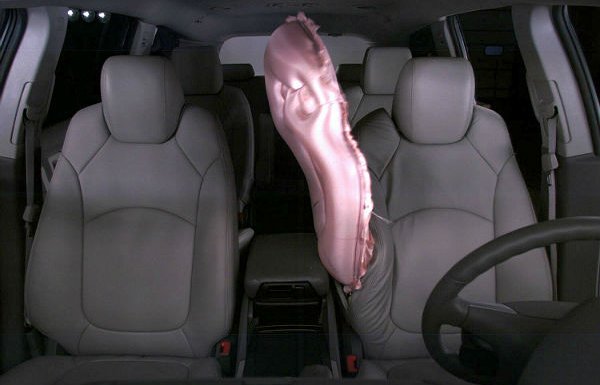 Side airbags offer protection to the occupants in case of a side impact. There are two variants. One is a side torso airbag, that is usually located in the seat, that inflates between the driver and the door, to protect the torso.

The second type is the curtain airbag. As the name suggests, the airbag is mounted on the roof and deploys like a curtain to offer protection for the side. Curtain airbags have been said to reduce brain injury or fatalities by up to 45 percent in a side impact with an SUV. Some vehicles offer this airbag which protects all three rows of seats in an impact.

Knee airbags are designed to protect the legs of occupants. It was first used in the 1996 model Kia Sportage vehicle and has been a standard equipment since then. This airbag is usually mounted under the steering wheel. Since they have proved to be very efficient, the knee airbag has become increasingly common since 2000. 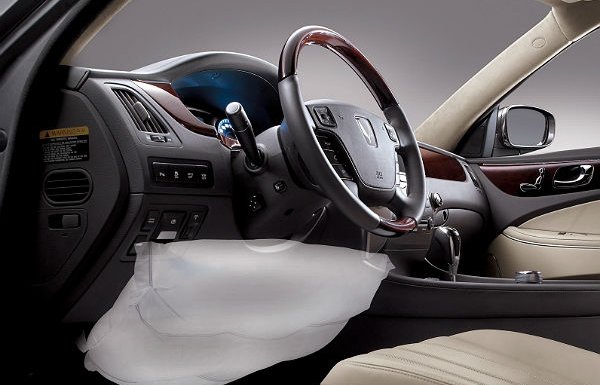 Rear curtain airbags are designed to offer protection to the head for occupants in the back of the car from impacts from the rear. The Toyota IQ featured this airbag in 2008. 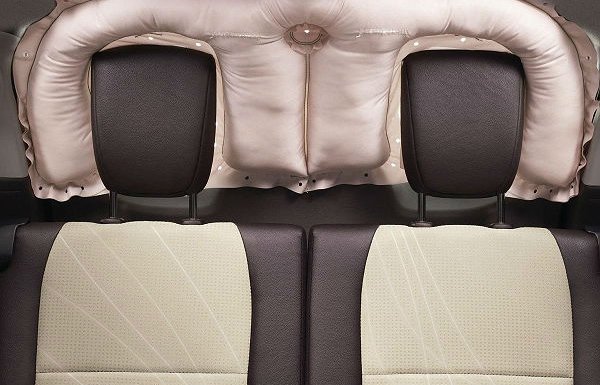 First introduced by Volvo in the V40, pedestrian airbags protect unprepared pedestrians in the event of an accident. In a pedestrian test conducted by Euro NCAP, the Volvo scored the highest for pedestrian safety.
Rear curtain airbags are designed to offer protection to the head for occupants in the back of the car from impacts from the rear. The Toyota IQ featured this airbag in 2008. 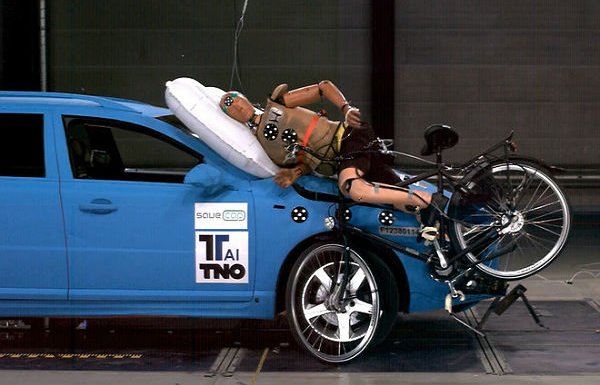 Even motorcycles come equipped with airbags to protect riders in a crash. Many have been tested over the years and in 2006, Honda introduced it in its production motorcycle, the Goldwing. Sensors in the fork detect and inflate the airbag in a severe crash. 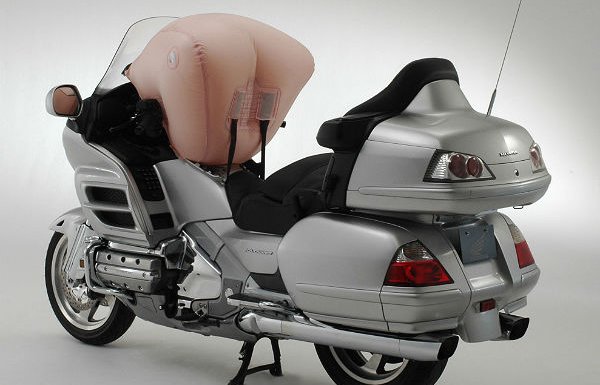 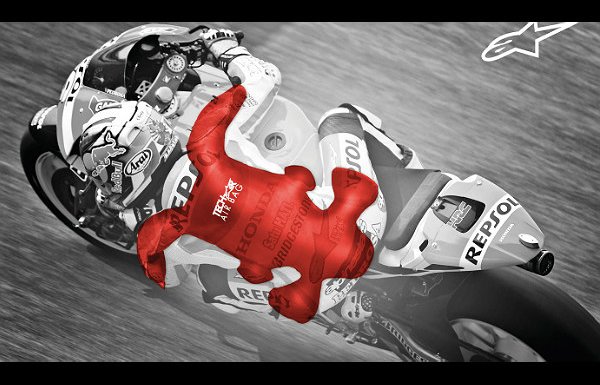 There are motorcycle safety gear manufacturers who have been offering airbags in riding suits for MotoGP riders. These kind of suits are now being available to everybody. A small sensor inside the suit detects when an impact is about to happen and immediately inflates inside the suit, offering additional protection to riders.

Who Can Tell Us The Name Of This Car?