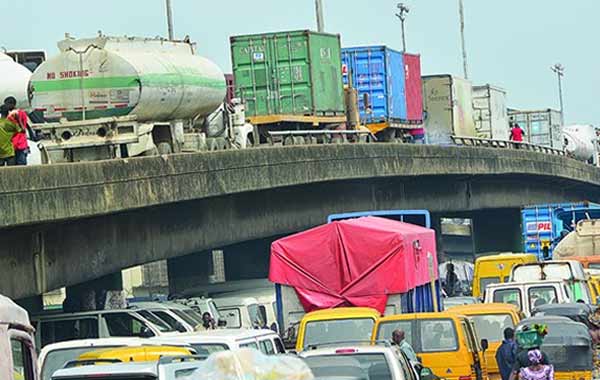 Bridges in Lagos, particularly Apapa axis, are at risk of collapse because of the weight of parked heavy-duty trucks on them.

These bridges are under great stress from immobile articulated vehicles, a situation worsened by recurring gridlocks and the deplorable state of roads leading to ports and tank farms.

The implication is that the bridges in Apapa could be carrying several million kilogrammes of weight daily.

Commenting on the situation, a structural engineer and former president, Nigerian Institution of Structural Engineers NIStructE, Victor Oyenuga, said “It is not right for trucks and tankers to park on bridges because the bridges were not designed as parks for them. When these vehicles are stationary on the bridges for a long time, they have negative impacts. These include deterioration, bridge-fatigue, damage or even collapse.

“There is also the risk of fire outbreak. If any of the articulated vehicles catches fire, there would be a chain reaction, which can cause severe damage to the bridge. “We are sitting on a keg of gunpowder because the bridges are weakening by the day, as tankers, trucks and articulated vehicles park on them due to traffic congestion.

“The load on these bridges, not originally designed to host heavy static vehicles, and a lack of consistent and thorough maintenance could spell tragedy”.

The past president of NIStructE who noted that bridges are designed for movement of goods and services said, “So, as structural engineers, we condemn this indiscriminate parking of trucks and tankers on bridges. It is not advisable, and we urge the government to address the issue.

“Something should be done to stop it very fast because of the negative effect on the infrastructure and possible disaster in the event of a collapse”.

Also commenting on the situation, past president of NIStructE, Dr. Samuel Ilugbekhai, said the state of the bridges is one of gross structural abuse, stressing that they were not designed to bear enormous weight from static trailers and tankers, and warned that their life spans could be shortened. 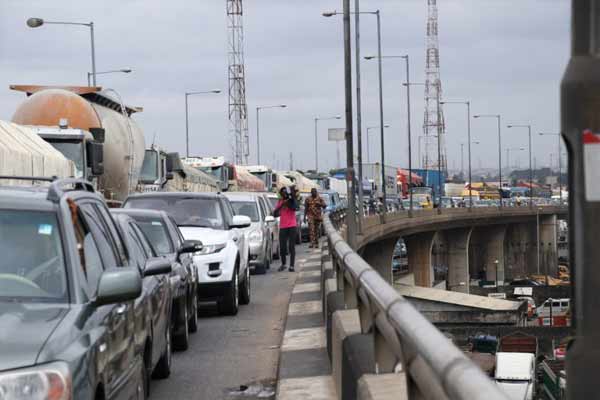 Urging government to put more effort into solving the problem, he noted the difference between buildings that house car parks and bridges. While multi-storey parks are designed for the specific purpose, bridges are intended to carry transitional loads within seconds. “They are not designed to retain loads for one hour, two hours, days or weeks,” Ilugbekhai said.

Effort to reach Federal Controller of Works in Lagos state, Engr. Olukayode Popoola, for his comment was not fruitful as according to him, he was in a meeting with his boss, and will get back. Our investigation has revealed that previous attempts by the Federal Government and Lagos State authorities to curtail the problem have proved abortive.

The office of the Federal Controller of Works, Lagos, has on several occasions given ultimatums to truck drivers or even deployed force, to no avail.