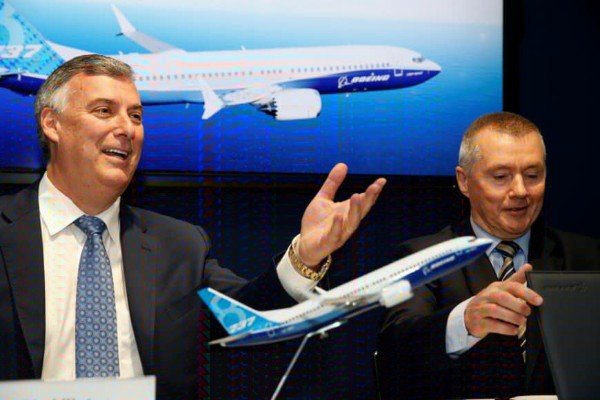 World’s largest aerospace company Boeing got a huge vote of confidence for its troubled and grounded 737 Max aircraft on Tuesday as International Airlines Group (IAG) announced it plans to buy 200 of the jets.

International Airlines Group (IAG) and Boeing said the two companies have been in discussions regarding the opportunity and signed a letter of intent at the Paris Air Show in a deal that would be valued at more than $24 billion, per list prices.

IAG, the parent company of Aer Lingus, British Airways, Iberia, Vueling and LEVEL, is one of the world’s largest airline groups with 582 aircraft flying to 268 destinations, carrying combined 113 million passengers in 2018.

Willie Walsh, IAG chief executive, said:
“We’re very pleased to sign this letter of intent with Boeing and are certain that these aircraft will be a great addition to IAG’s short-haul fleet,” said Willie Walsh, IAG chief executive. “We have every confidence in Boeing and expect that the aircraft will make a successful return to service in the coming months having received approval from the regulators.”

In selecting the 737 MAX, IAG says it will fly a combination of the 737 MAX 8, which seats up to 178 passengers in a two-class configuration, and the larger 737 MAX 10 jet, which can accommodate as many as 230 passengers.

Boeing Commercial Airplanes President & CEO, Kevin McAllister, said :
“We are truly honored and humbled by the leadership at International Airlines Group for placing their trust and confidence in the 737 MAX and, ultimately, in the people of Boeing and our deep commitment to quality and safety above all else,”

“We are delighted that the IAG team recognized the superior qualities of the 737 MAX and has indicated an intention to return to the Boeing 737 family. We look forward to building on our long-standing partnership with IAG for many years to come.”

The ordered 737 MAX aircraft is still the best selling jet ever. Boeing has continued to build the troubled jet despite its worldwide grounding in mid-March after the fatal crashes in Ethiopia and Indonesia.

No one knows when the 737 Max’s will return to service.

Tanzania Is Set To Test-Run Its High-Speed Electric Trains. See How Much It Cost