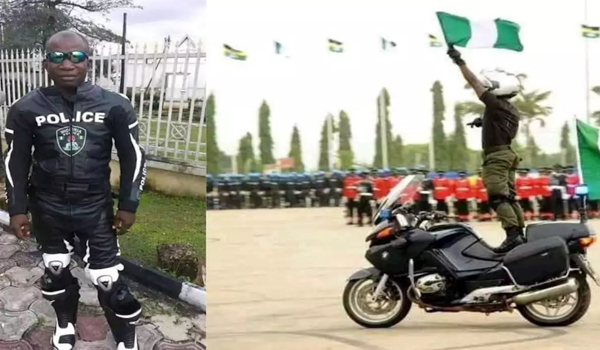 President Muhammadu Buhari has lost one of his police outriders, Inspector Aminu Salisu.

Inspector Aminu Salisu, a police outrider of President Muhammadu Buhari’s convoy lost his life. He died in a motor accident in involving the convoy of Kogi state governor, Yahaya Bello, on Monday in Abuja,

Salisu was better known as Aminu Rider. He was famed for his motor riding skills where he performed stunts and excited onlookers as part of Buhari’s convoy.

The convoy was said to be travelling to Enugu state.

Salisu, also known as Aminu Rider was very popular especially in Abuja for his stunts on police power bike on the streets of Abuja.

He was capable of riding a power bike while standing on it and dancing at the same time for a long time.

The deceased hailed from the Daki Tara area in Katsina metropolis of Katsina state.

Salisu has been laid to rest in accordance to Islamic traditions and his hometown was in the Daki Tara area in Katsina metropolis of Katsina state.

President Buhari Names Expressway In Abuja After The President Of Niger