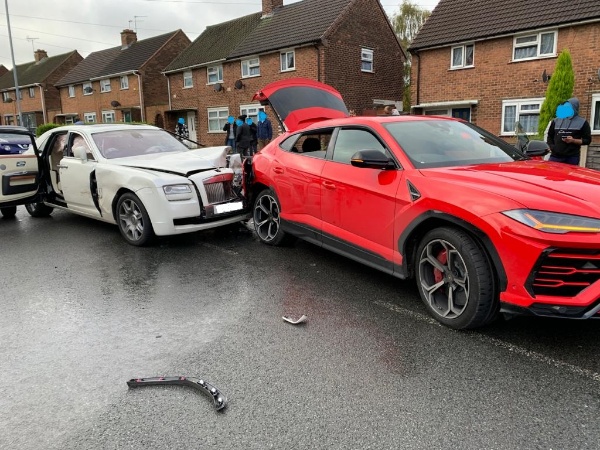 Police are searching for the driver after the £410k fender bender that occurred on Tuesday October 13th.

Rare crash, Rolls-Royce Ghost crashes into the rear of a Lamborghini Urus SUV. The crash is estimated to be worth nearly half a million dollars.

Police are searching for the driver of a Rolls-Royce Ghost who fled the scene after crashing into two cars, including a red Lamborghini Urus SUV worth £160,000.

West Midlands Police were called to the scene in Walsall on October 13 after the expensive crash that reportedly recorded no injuries.

Images shared by the department on its Twitter showed the mangled front grille and a crumpled bonnet of the Rolls-Royce. The front passenger side was also damaged in the crash. The Lamborghini Urus SUV also suffered massive damage to its rear bumper.

“Well…this is an expensive crash.

“I wonder if it was the cost or another reason why the Rolls driver left the scene?

“Either way, we have his photo and will ask him very soon.

“Driver was not driving for the conditions and obviously can’t handle a car like this.”

No arrest have been made, but police says it has the photo of the runaway driver. The driver reportedly left a photo of himself in the car.

11-year-old Stole And Drove Off A School Bus, Arrested By Police In Louisiana (PHOTOS/VIDEO)