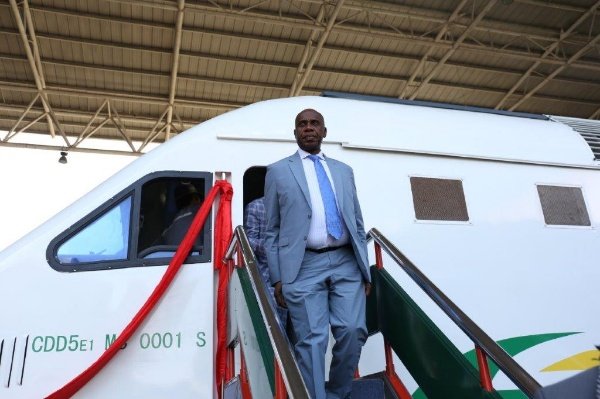 The Federal Government (FG) of Nigeria has announced the commencement of free train rides on the new Lagos-Ibadan railway service.

The Minister of Transportation, Rotimi Amaechi, has taken to his twitter handle to announce the commencement of free train rides on the new Lagos-Ibadan railway service.

Our free rides on the Lagos-Ibadan standard guage rail line will begin today and run through March, 2020. Commuters on that route can take advantage of it and save on transportation during the festive season & beyond. Let’s ride to the #NextLevel pic.twitter.com/zJ0FkMPt72

According to his tweets, the free train ride commences today, November 30, 2019, and will run through March, 2020.

The honourable Minister said the free train rides would last for four months. He urged commuters to use the train service during the festive season.

“Our free rides on the Lagos-Ibadan standard gauge rail line will begin today and run through March, 2020.”

“Commuters on that route can take advantage of it and save on transportation during the festive period and beyond. Let’s ride on the #NextLevel.”

He also said the free train rides will allow commuters to save on transportation.

This supposed good news was greeted with several reactions, as some followers lauded the move, while others criticised the development.

Some of the tweets from those that appreciated the move includes:

“Wow! This is really a good one. Little by little we shall get there.”

“The lion of the Niger Delta, the Knight and the crusader of next level, thank you very much for not disappointing Nigeria and the peoples President, PMB.”

Bintin L’aye tweeted,
To the wailers, this is #FakeNews. To us, it’s a sign of good things to come to Nigeria under APC/PMB govt Thank my Minister 4 being such a hard worker. But, pls; ticket automation is a must if we don’t want our evil servants shortchange Nigerian as it’s happening in Abj/d route”

But a user named Adedayo believes the arrangement will cause overcrowding since it is free,

He said in his tweets that,

“there will be overcrowding, no one to hold accountable for poor service as it is free.”