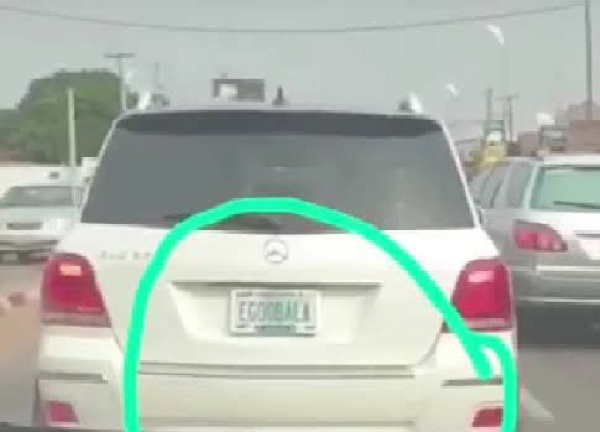 The Corps Marshal of the Federal Road Safety Corps (FRSC), Dr. Boboye Oyeyemi, has ordered the immediate withdrawal of a custom number plate, ‘Egboobala’, an Igbo word which translates to ‘Blood Money’, seen in a now viral video.

The now banned number plate number, allegedly issued by FRSC South East office, was affixed to a Mercedes-Benz GLK 350 SUV seen cruising on an unnamed road, probably in the Eastern part of the country.

“The attention of the Federal Road Safety Corps has been drawn to a vehicle seen with a fancy number plate with the inscription ‘Egoobala’, an Igbo word that connotes blood money.

“This is to inform the public that the Corps Marshal, Dr. Boboye Oyeyemi has directed the immediate withdrawal of the number plate, having known the true meaning of the word in Igbo language.

“While assuring the public of the Corps commitment to safer roads, fuller lives, the motoring public should be assured of our commitment to ensure due diligence in all our processes and procedures in keeping with our corporate mandate towards effective service delivery.”

In addition to maintaining the validity period for drivers’ licences, the FRSC statutory functions also include designing and producing the driver’s license to be used by various categories of vehicle operators.

Thousands Of ‘Unfinished’ Ford Bronco Pile Up, Can’t Be Delivered Due To Chip Shortage

Customs Explains Why New VIN Valuation Being Used Will Increase Its Revenue, Transparency