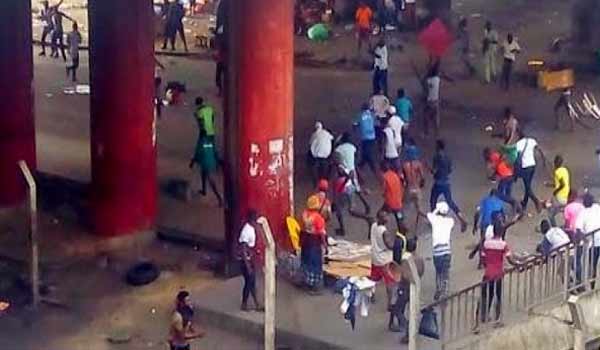 Hoodlums and transport union members, who have taken over control of traffic along Oshodi-Apapa expressway, have disappeared from the road, following the presence of soldiers to the axis, thereby easing traffic. This came after series of failed efforts to restore sanity by Federal agencies and Lagos State Government.

Recall that the military authorities had earlier withdrawn their personnel, deployed to complement the effort of the now disbanded Presidential Task Team, headed by Vice-President Yemi Osinbajo, to clear Apapa ports access roads of gridlock.

Recently, apparently overwhelmed by activities of miscreants and recalcitrant port operators, the Lagos Special Traffic Management and Enforcement Compliance Team, expressed willingness to resort to using the military personnel in order to complement the existing structure in ensuring compliance with the newly introduced Electronic–Call Up system in port operations, particularly, along Oshodi-Apapa Expressway.

The mayhem, often caused by truckers, particularly tanker drivers who parked indiscriminately along the Oshodi- Apapa Expressway axis, has relatively disappeared as military men were seen at strategic points, controlling traffic, yesterday. Contrary to usual indiscriminate parking of trucks and attendant gridlock, the miscreants and union members were not seen yesterday, as military men were seen stationed around Mile-2, Otto-Wolf and UBA points, Kirikiri Road.

It was observed that the men in military camouflage and some men of the Lagos State Traffic Management Authority, LASTMA, were seen controlling truckers in an orderly manner.

The Chairman of the council, Mr. Tayo Aboyeji, had accused the military taskforce of extorting the union’s members who came to load petroleum products and urged the government to wade into the matter.

Dogecoin May Replace Bitcoin For Paying For Teslas