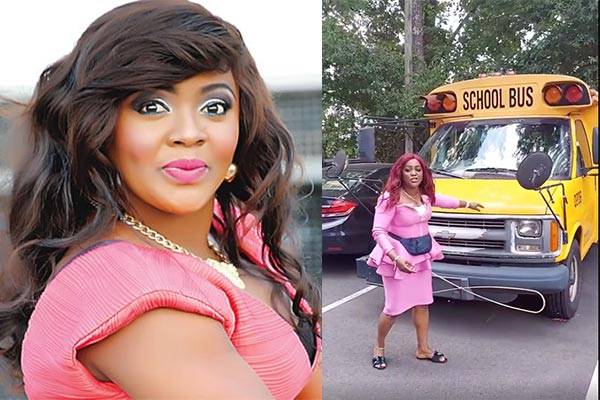 Popular Nigerian Comedian Helen Paul was spotted calling passengers like a bus conductor in a hilarious video. A twitter user, Oga Sammy posted the comic video where Helen was calling passengers into a parked school bus somewhere in the United States.

Borne out of her Comedy trait, she mimicking Lagos Danfo Conductors using their voice tone to beckon on passengers.

Helen Paul is a comedian, singer, and actress from Nigeria. She is also a stand-up comedian, known as Tatafo. She is characterized by voice varieties that make her sound unique.

Helen also graduated with a doctorate in Theater Arts from the University of Lagos.

Paul has worked and served as a freelance and full-time presenter at several media houses in Nigeria. These include Lagos Television (LTV 8), Continental Broadcasting Service (CBS), and MNet (where she currently co-presents JARA on Africa Magic).

Helen broke out as a naughty comic character on the radio program Wetin Dey on Radio Continental 102.3FM, Lagos. Listeners knew her on the program as “Tatafo”, a witty kid who addresses and lampoons societal issues in a satirical manner.

Could The 2022 Honda Civic Look Like This Rendering? (Photos)

Remember This Russian SUV Lada Niva? It Has Been Upgraded (Photos)