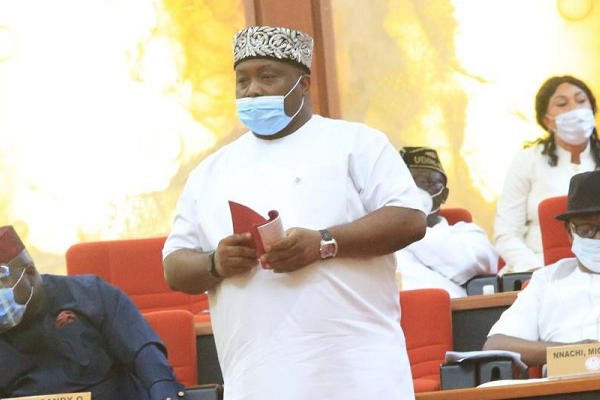 Senator Ifeanyi Ubah, who is the senator representing Anambra South Senatorial District, has urged the senate to scale down over 136 roadblocks/checkpoints between Ijebu Ode and Onitsha Head Bridge.

He raised the complaint in a press statement issued after plenary on Wednesday titled “Urgent need to reduce over 136 roadblocks/ checkpoints between Ijebu Ode and Onitsha Head Bridge”.

Today, I came under Order 43 of the Senate Rules to raise a complaint about the increasingly worrisome number of roadblocks/checkpoints mounted by the Nigerian Police Force, Nigerian Army and other paramilitary security agencies between Ijebu Ode and Onitsha head bridge.

I emphasized that the incessant retinue of checkpoints spanning over 136 roadblocks between Ijebu Ode and Onitsha head bridge appears to have outlived its usefulness, in terms of curbing security breaches as they now serve as conduit pipes for extortion and intimidation.

I also stressed that the number of checkpoints between Ijebu Ode and Onitsha head bridge are even more than checkpoints in Boko Haram infested areas in the North, which makes one wonder if southeastern roads are in a state of war/emergency.

While acknowledging the issue of insecurity in Nigeria that has necessitated increased security presence, I noted that we cannot fail to condemn the increasing militarization of our roads.

I stated that these multiple roadblocks/security checkpoints, couple with the rough condition of roads leading to the south east region, are causing unnecessary traffic buildup with untold hardship on road users.

I used the opportunity to remind the Nigerian Senate that this matter which has been on the front burner of National discourse has reduced the ease of doing business and inter-state commercial activities in the region.

Conclusively, I urged the Senate to as a matter of urgency, review the over 136 checkpoints/roadblocks between Ijebu Ode and Onitsha head bridge with a view to scaling them down, especially in light of the unconstitutional breaches, humiliation and hardship inflicted upon motorists and travelers.

It is my belief that these offensive and dangerous road blocks can be replaced with high tech patrol teams and effective surveillance and communication systems on these highways.

“Snow” On Lagos Roads: LASG Explains What It Is (VIDEO/PHOTO)