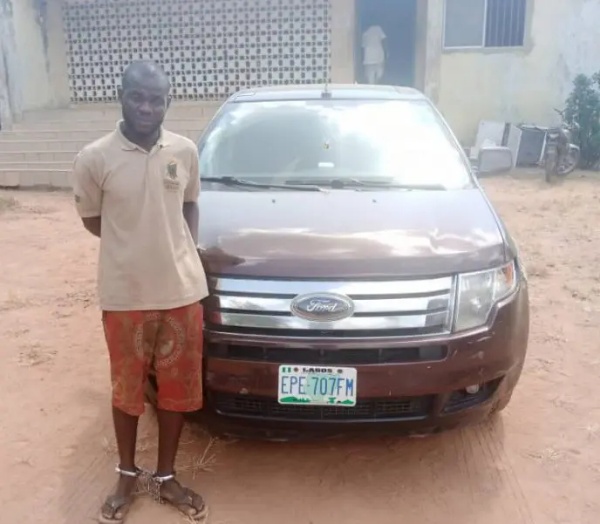 Lagos-based car wash operator runs away with customer’s car; arrested while on his way to sell it.

Lagos car wash operator, Idris Ayotunde runs away with customer’s car, arrested while on his wa to sell it

The owner of a Ford sedan has discovered that handing over the keys to a stranger could be one of the worst things to do after a car wash operator absconded with her car.

According to reports, the owner of the car, Mrs Shofidiya Tosin, brought her Ford sedan with registration number EPE 707 FM to the centre for vacuum cleaning.

Since the car wash didn’t have vacuum cleaner, she handed over the key to the suspect after he pleaded to take it to another car wash nearby for vacuum cleaning.

After the car theft, car owner reported the case at the Shasha Police Station. The suspect, named Idris Ayotunde, was later arrested by Men of the Ogun State Police Command. He was reportedly on his way to Ibadan where he intended to sell the car.

Oyeyemi said the car owner has been contacted while the case has been transferred to Lagos, where the theft happened.

Part of the statement released by Oyeyemi reads :

“Since he did not have vacuum cleaner in his car wash, he decided to take it to another car wash nearby. But he changed his mind on the road and bolted away with the car.

“It was on his way to Ibadan where he intended to dispose the car that he was arrested.

“The suspect was arrested at Alakija village via Olodo around 8. 17 am by a safer highway patrol team which was on stop and search along the Abeokuta-Ibadan Expressway.

“The team stopped the car and demanded its documents, which the suspect was unable to produce; consequent upon which he was taken to Odeda divisional headquarters where the DPO, Ajayi Williams, personally interrogated the suspect and found out that he actually stole the car.”