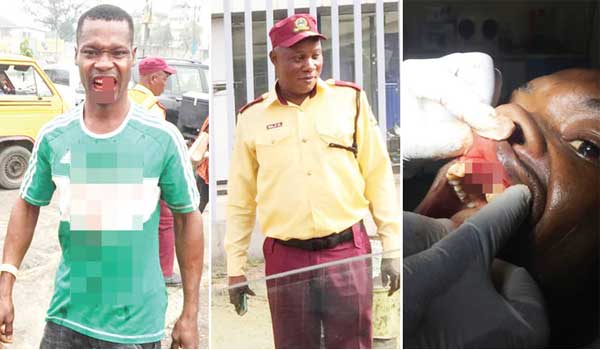 A driver, Michael James, is still in pain after six officials of the Lagos State Traffic Management Authority – LASTMA – and men of the Lagos State Police Command allegedly brutalised him. This happened during an arrest for a traffic offence he described as illegal on Lateef Jakande Road in the Ikeja Local Government Area of the state.

It was gathered from James that the officials, while enforcing his arrest, were assisted by two hoodlums. In the process, two of his teeth were knocked out. His gum was also ripped off. This was while they were trying to dispossess him of his vehicle.

James said the policemen and LASTMA officials released him and handed his vehicle to him. This was after they realised that he was bleeding profusely. He added that he had spent over N80,000 on medical expenses.

He stated, “I was on my way to our factory on Adeniyi Jones to convey nylon for my boss. As I drove through Lateef Jakande Road, three officials of LASTMA, two other guys and three armed policemen suddenly stopped me. I asked what I had done and they said I drove against the traffic. This surprised me because I was the only person they stopped as other vehicles driving on the same lane were not stopped. I had been plying that route since 2001 and no one had ever stopped me for driving against the traffic.

“As I was still explaining to them when one of them attempted to forcefully remove the vehicle’s key. I pleaded with them but they overpowered me and pushed me out of the vehicle. I held one of them firmly and we both landed on the ground and the LASTMA officials seized the opportunity to drive my vehicle away. The remaining officials and policemen started beating me, while I was on the ground and in the process, they knocked out two of my teeth and my gum was affected.

“When they saw that I was bleeding heavily, they stopped beating me and ordered me to enter the commercial bus they were using to operate and drove me down to Anthony bus stop, where my vehicle was parked. When we got there, they said I should bring my phone, but I told them that I would not release my phone to them unless they killed me. 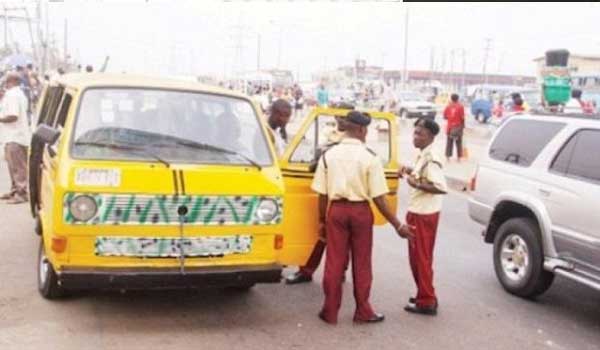 “I called my boss, who connected me with an official, who intervened and after realising that the road where I was accosted was not one-way, they were instructed to release my vehicle.”

James, however, said a few days after he was assaulted, he wore a face mask, drove on the same road and saw one of the LASTMA officials, who assaulted him, adding that he knew he was brutalised unjustly when he asked the official if he was driving against the traffic and he said no.

He stated, “I went straight to see a dentist to treat me because two of my teeth had been removed and my gum was also affected. I have been in severe pain since the assault; in fact, my teeth were stitched to my gum and they removed again. After some days, I drove on the same road and luckily I saw one of the LASTMA officials, who assaulted me.

“He could not recognise me because I wore a face mask; I asked if the road was one-way and he said it wasn’t. Then I used that opportunity to snap his picture without his knowledge. I recognise all those involved in the illegal duty and I showed my boss when we visited the LASTMA head office in Oshodi. Even after I spent over N80,000 on treatment and I am still not fine. I want them prosecuted. The incident happened on March 24, 2021.”

When contacted, the spokesman for LASTMA, Olumide Filade, said, “An investigation will be conducted on it and anybody found culpable will face disciplinary action. The victim should also visit our office to make an official complaint.”