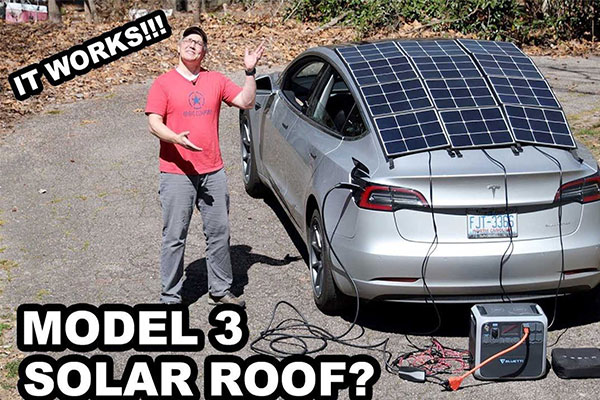 An electric car user has added solar roof to his Tesla Model 3 as he plans to experiment on extending his drive range.

This Tesla Model 3 owner didn’t permanently attach the solar roof to his car. Instead, he just laid them over the car. Obviously, this wouldn’t work for use while driving.

However, if one goes camping and the car will sit for a long period of time with no access to a charger, this might do the trick.

The video of this customized Tesla has generated divers questions whether solar roof on an electric car will be common a thing in the future?

Another questions : “How well does it work?” Hopefully, as technology improves and costs come down, this will become more commonplace going forward, but it’s going to be a while.

Few cars are available with solar roofs, but they’re mostly a novelty rather than something useful.

For example, when Hyundai completely redesigned the Sonata Hybrid for the 2020 model year, it added a solar roof as an option. It’s only on the top Limited trim, which costs about $8,000 more than the base model, and it can add about 2 miles of range per day.

Since the Sonata Hybrid isn’t a plug-in hybrid – Hyundai eliminated the Sonata PHEV as part of the 2020 redesign – the added range really just means saving some pocket change on fuel costs. With over 600 miles of range, the Sonata Hybrid doesn’t need the 2-mile bump.