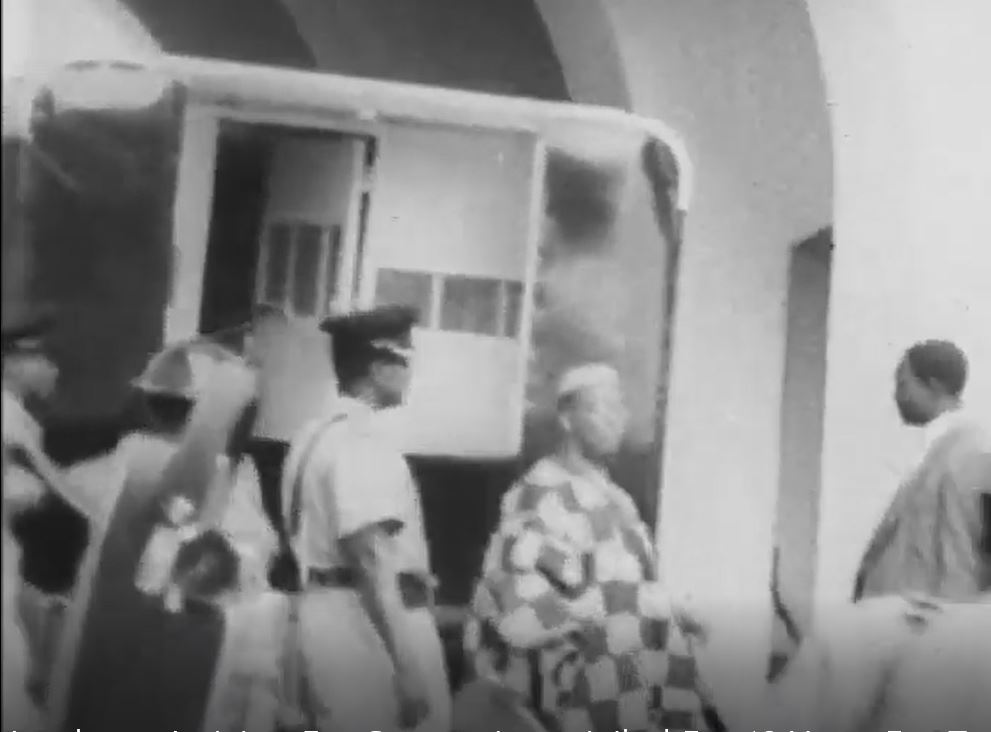 The footage below shows scenes outside a Lagos court on Wednesday, September 11th 1963. The video shows Chief Obafemi Awolowo arriving at the court in a Black Maria. He had been charged with Treasonable Felony, Conspiracy and the Possession of Firearms.

Awolowo and several of his disciples were later sentenced to 10 years in prison for plotting to overthrow the federal government of Prime Minister Sir Abubakar Tafawa Balewa.

In the video, Chief Awolowo can be seen alighting from the “Black Maria” at the 28-second-mark.

The trial was that of the former premier of Western Nigeria, Chief Obafemi Awolowo. He, together with 24 others, were accused of planning to overthrow the civilian government of Sir Abubakar Tafawa Balewa.

The problems started a year before. That was when tension arose in the Action Group political party. This led to the total breakdown within the regional party. It ultimately led to the removal of one of its more prominent leaders, Chief Samuel Ladoke Akintola.

Akintola’s removal sparked bloody riots on the streets of the region. It also led to an equally violent showdown on the floor of the regional legislature.

A state of Emergency was declared and the Government was dissolved.

Action Group leaders were placed under house arrest and a federal administrator was appointed.

The new administration initiated an investigation into various allegations against the past administration. Accusations of criminal misuse of public funds were made and in the course of the financial investigation, police uncovered evidence, linking Awolowo and other AG members in a purported conspiracy to overthrow the government.

Chief Obafemi Awolowo was the leader of the Opposition in Nigeria’s Parliament at the time. He was found guilty and sentenced to 10 years in prison for having plotted to overthrow the Federal Government.

Chief Obafemi Awolowo was credited for introducing some development initiatives in the Western region.

At considerable expense, he introduced free primary education for all and free health care for children in the Western Region. He also established the first television service in Africa in 1959, and the Oduduwa Group, etc.  All of these were financed from the highly lucrative cocoa industry which was the mainstay of the regional economy.