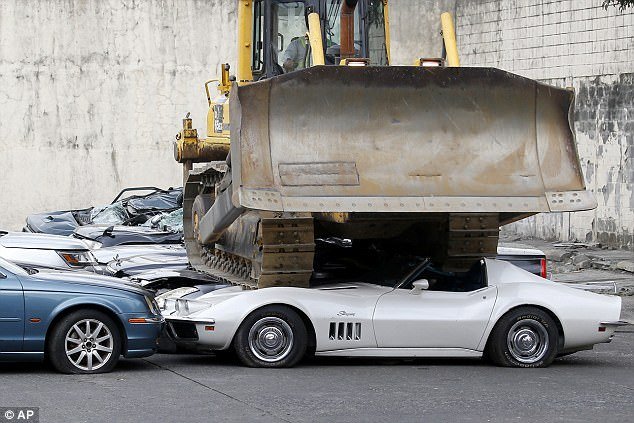 Philippine President Rodrigo Duterte had bulldozers destroy $1.2 million worth of smuggled cars at the Bureau of Customs, days after promising to dispose of vehicles brought into the Southeast Asian country illegally.

Some of the cars were luxury models, valued as high as $115,000. Yet, it took just minutes for them to be reduced to nothing more than scrap metal.

He was on hand to watch Jaguars, BMWs,Corvette Stingray Lexus and SUVs be crushed and He said “Give it to the buyer of steel”. “They cannot have cars like that. But they can get something, make toys out of it.”

Last year alone, the Bureau of Customs seized $2.93 million worth of smuggled cars, part of a greater $866 million in seized goods according to government data.

The finance minister said “It does not pay to evade taxes in the Philippines so might as well stop trying, because you will never succeed”, just as 20 vehicles were about to be destroyed at a Manila port. Another 10 were bulldozed in ports in the cities of Davao and Cebu.

Vehicle smuggling is a big problem in the Philippines where car taxes can go as high as 50 % for cars valued over approximately $77,000.

Normally, seized smuggled vehicles are impounded and then auctioned with the government taking the proceeds. He said ‘I will pay for them, no problem,’ Duterte said.

President Duterte, known for his bloody war on drugs and disdain for criminals, has promised to usher in a ‘golden age of infrastructure’ over six years, worth $180 billion.

He has launched a comprehensive tax reform programme to help fund it.

Is the Philippines President’s actions possible in Nigeria?

All New Mercedes Sprinter 2018 Revealed With 1,700 Configurations For Any Job