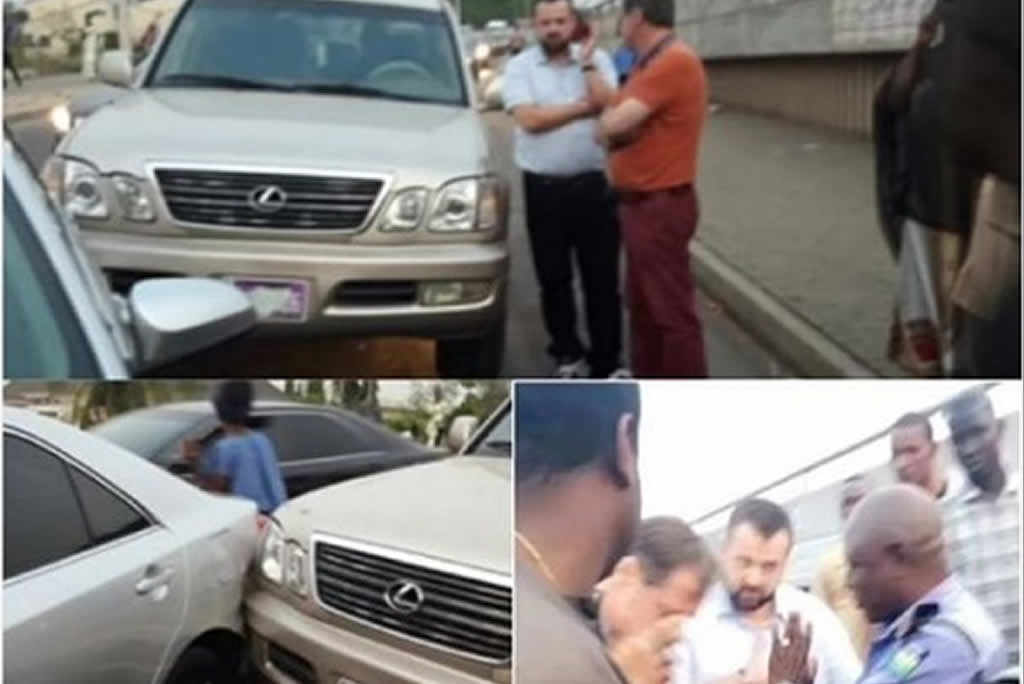 This Nigerian claims some foreigners from Poland hit their car from behind.. and got the Nigeria Police to arrest his brother who was driving.

Read the story as narrated by the sister of the victims:

“Yesterday my brothers and I went to Mami market, Abacha Barracks. While awaiting the gate opening, this Highlander jeep, number place umber 110 CD 06, overtakes us from behind and bashes our car.

Everyone in view saw this including the soldiers, they tried to flag them down but they zoomed off to everyone’s dismay. The soldiers were shouting that we should chase them. We caught up with them and blocked them with our car.

We found 4 Polish inside the Jeep. Even after we parked right in front of them, they still drove right into us, my brother had to open their car and put the car’s hand break on and remove the car key from the ignition to stop them.

Police gathered to ask what happened, we explained it all to them. The white man driving ran into us, intentionally, the second time, so that people would think we were trying to overtake wrongly.

They stepped out and the first thing they said was “we’re diplomats”.. At this point I’m beyond flabbergasted. They turned the whole thing around saying we bashed them.

My brother decided to go to the Barack and bring 2 army witnesses. We insisted that damages be paid for since ‘sorry’ wasn’t forthcoming from them. You will not believe that the police let these white men go.

And took us to the police station for statement, just because they were white and claimed to be diplomats. As I speak now, my brother is being held at Asokoro police station, the DPO of the station now claims we were trying to kidnap the white men.

He has been detained even though the soldiers came in as witness, two lawyers are on standby, yet the DPO is adamant. This is a clear case of man know man or highest bidder wins.

I have lived abroad and there is nowhere hit and run cases aren’t charged, this cannot happen in Poland, they wouldn’t even try it, but Nigeria is a lawless and the police are ever ready to participate and cooperate with them.

Nigerian police would see the truth and rather be bribed by white men. They’re chilling at their embassy while my brother is being detained by the police.”

A public call is currently being made to the Inspector General of Police, Ibrahim Idris to salvage the despicable situation that could tarnish the image of the Nigeria Police Force.