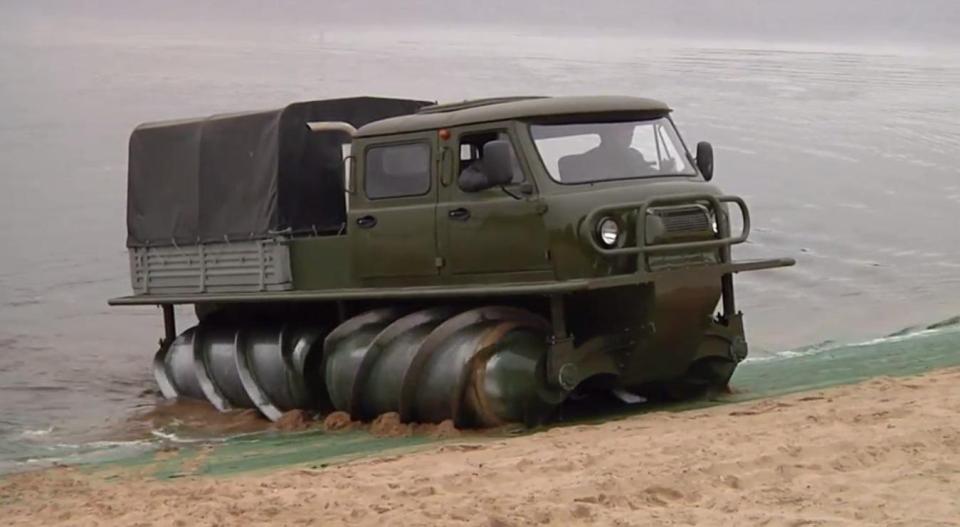 A Russian mechanics expert has restored a Soviet-era military vehicle that moves without the use of wheels or tracks,but is entirely screw-propelled.

Originally used by the Russian military in the 1970s,the vehicle uses giant metal screws which move it forward by twisting across the ground. The unique truck can move across most difficult terrains,including water,swampland and snow.

Fitted with a 159bhp engine,it is capable of carrying diggers,cranes and rescue equipment to areas that were previously inaccessible by land.

The Deputy Head of the Construction at Novgorod State Technical University said it will be actively used,at first,by the army,at second, by geologists,by oil and gas producers.

“We got used to solid surfaces,but regions of Siberia and the Far North mostly have creeping soil. This car is vital for oil and gas producers.”

Screw-propelled machines were first used by the military during the Second World War, after a German soldier came up with a design for a snow machine using the mechanism.

The USA used similar vehicles to transport supplies across swamp lands during the Vietnam War, but they have remained largely disused since the mid-1970s.

What Would You Do If Your Airbus A380 Airplane Lands Like This?