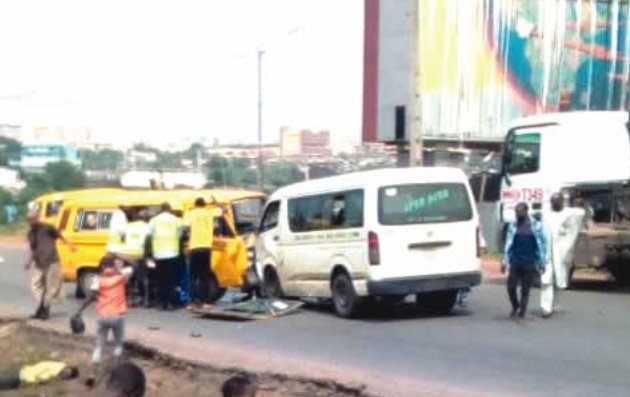 This accident happened along the Lagos-Ibadan expressway.

Mr Clement Oladele, FRSC Sector Commander, told the News Agency of Nigeria in Abeokuta on Wednesday that the accident occurred around 5 pm at Lamona Park on the expressway.

Mr Clement Oladele said the Volkswagen commercial bus marked LSR 971 XG had 28 passengers, including 16 females and 12 males as well as three children, on board.

He said the accident was caused by a tyre burst which resulted in the vehicle somersaulting.

Expert Advise On What To Do To Properly Handle A Tyre Blowout.

“Two people died in the accident and their corpses have been deposited at Isara mortuary while the injured were taken to Isara Hospital, Ogere,’’ he said.

He advised motorists to obey traffic regulations and follow instructions from the FRSC patrol teams and other sister traffic agencies.

Oladele also urged motorists driving into construction areas to obey the maximum speed limit of 50km per hour stipulated on road signs along the corridors and avoid overtaking.

Related Topics:accidentFRSChighwayOvertakingtyre blowout
Up Next

Happy Eid To All Our Muslim Readers