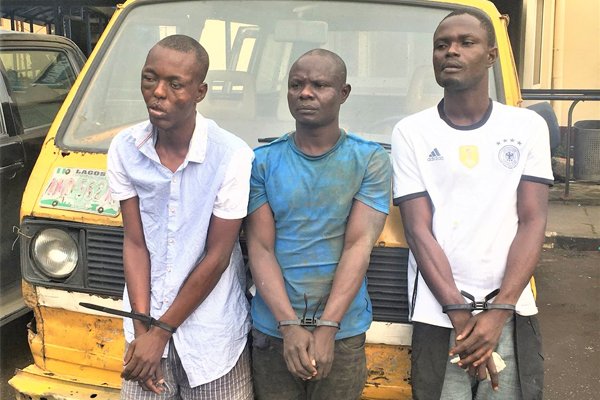 They were actually four members but one of them jumped into the lagoon while being chased by officers of the  Rapid Response Squad (RRS).

The arrested robbers, John Akinyemi, 27, Paul Oliseh, 37, and Amos Williams, 12, were arrested on Monday afternoon on the Third Mainland bridge after a chase by the Rapid Response Squad patrol team monitoring Iyana-Iworo.

One of the robbers, who was later identified as Junior, 19, was reported hit by speeding vehicles twice before he jumped into the Lagoon.

According to the leader of the gang, John Akinyemi, “there were four of us. I was in charge of calling the team to work. It was our first trip of the day. We took four passengers in Estate Bus stop in Alapere. They were going to Oshodi. We dispossessed them and dropped them off before Iyana-Oworo one after the other”.

“We took their phones and money. We have been doing this for more than three months. We sell the mobile phones and jewelries, and we share the money”.

One of the victims, Semiu Oluwaseun, who alerted the RRS officer immediately he was thrown out of the moving bus, said the robbers collected his phone and the sum of N500, 000.

Ojuroye added that after the struggling with the robbers, they poured a peppery substance on his face, took his money before throwing him off around 8.00pm.

The robbers were paraded by the Lagos State Commissioner of Police, Imohim Edgal, at the Command Headquarters. 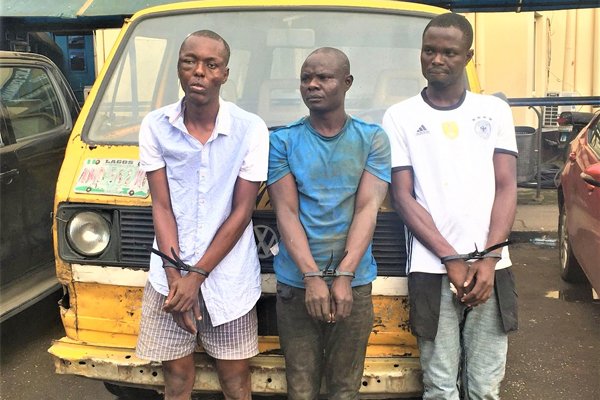