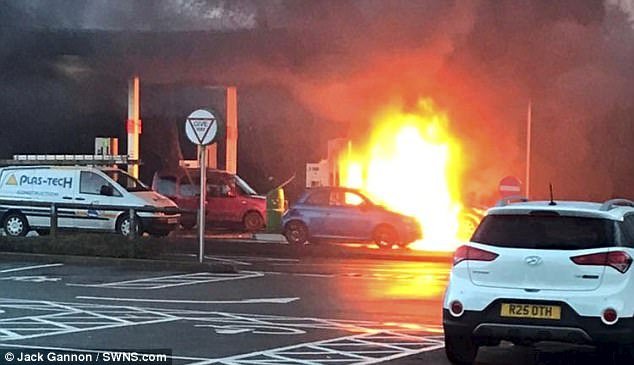 A 54 yr old driver,Julie Nicklin, was lucky to be alive this week after accidentally pouring several gallons of petrol down the air intake of her 2005 Smart ForTwo,which promptly exploded when she turned the key.

The mother-of-two was trapped in her burning car right next to a fuel pump after the engine ignited, sending bystanders running for safety. Fortunately, a nearby construction worker ran up to the inferno and pulled the mother-of-two out before she suffered serious burns.

As he helped her away from the scene, a second explosion rocked the area as the fuel pump went up in flames.The pair were then taken to the superstore by staff to be checked over,but fortunately she was unharmed.

The Smart ForTwo was completely destroyed by the fire, which was so intense that several motorists on a nearby road had to be treated for smoke inhalation.

If you’re wondering how it’s possible for someone to confuse a car’s air intake with its fuel filler, look no further than the design of Smart cars themselves, which have almost identical ports located on each of the rear fenders. One is the fuel filler, and the other is the intake for the rear-mounted engine.

The actual fuel cap is on the right-hand side and air intake left-hand side of the 2005 Smart Fortwo Pulse model. Users on Smart car forums have made the same mistakes

The air intake requires a bit more effort than the fuel filler to open and is stamped with NO FUEL on the inside, but without a doubt it’s a needlessly confusing design.

It’s since been updated to look like an actual air intake on newer cars, but that doesn’t do much for the owners of older models.