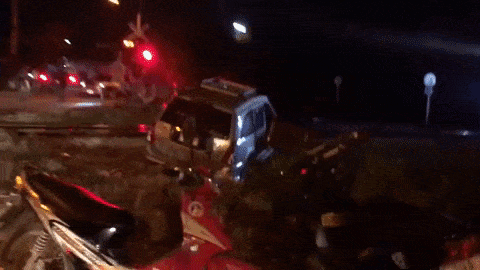 Whenever we see a car somewhere near a railroad crossing or get stucked we can imagine the worst.

This particular incident occurred in Thailand, and involved the driver of an SUV who, according to the video’s description, was suspected of being drunk.

The good news is that at the time of the impact nobody was in the car.

As you can see, the train does not need much momentum (i.e mass times velocity) to clear a normal SUV on its way. Even the the weight  of this locomotive makes it easy.

Finally, the train stopped, but not before the car was already on its side after flipping over.

Although there is a rule not to park on rail tracks, packing on rail tracks is still very common in Lagos . These are sometimes caused by sudden breakdown of the vehicle or when stucked in traffic (hold up).

Do you think turning on flashlights and waving desperately to the conductor could have  stopped the train sooner.

What’s the best way to stop a fast moving train (locomotive) from hitting an object on its path ?

1,730 2018 Toyota Camry Recalled Because They Are Equipped With Bigger Pistons